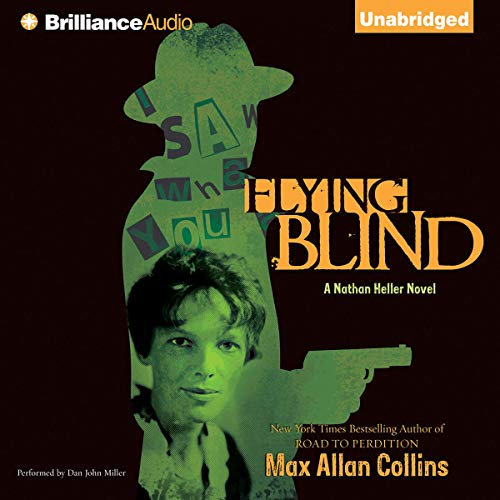 In 1935, Nate Heller is hired to escort Amelia Earhart on a speaking tour because of numerous cut-and-paste death threats against her life. Heller suspects the threats are a stunt by Earhart's publicity-hungry husband, and the detective’s growing closeness to the bisexual aviatrix leads to a steamy affair.

Two years later, when Earhart embarks on her flight around the world - and mysteriously disappears over the South Pacific - Uncle Sam enlists Heller in a clandestine search of Japanese waters for the popular Earhart... and the top-secret plane she was flying.

Blending the unsolved mystery and historical facts swirling around Earhart’s disappearance with Heller’s sarcastic wit, Max Allan Collins delivers another riveting tale of intrigue and betrayal, taking Heller far from his native Chicago. As he investigates, Heller discovers a treacherous plot involving marital betrayal and the U.S. government. Heller’s secret undercover mission leads him to Saipan, where Earhart is believed to be held prisoner. Nate’s heartbreaking attempted rescue leads the detective to return, many years later, to extract his final revenge.

What listeners say about Flying Blind

With Nate Heller's continuing adventures, we travel back to pre-World War II as he signs on to be a bodyguard for Amelia Earhart. As is usual, what unfolds is an interesting mix of fact and fiction woven into a story that only Max Allan Collins could portray. With this one, there is much more fiction as the speculation on exactly what happened to Amelia Earhart reaches the heights of all the conspiracies told over time. Even so, with Nate in the middle of the action, it is an enjoyable ride all the way through.

Once again Dan John Miller does a great job reading the tale and has become The voice of Nate. Great listen all around.

One of the better ones in the series

The book starts off a little slow, but soon the reader is drawn into a captivating story of the life of Amelia Earhart, the circumstances of her last flight and attempted rescue. All of this seen through the eyes of the cynical detective, Nate Heller. There's something to the story, a cohesiveness and forlorn quality that hasn't been seen in the Heller Series since the first few books. Perhaps it's the increased volume of myths and rumors about Amelia's disappearance with which Collins can base his story, but there's an added depth to this story, and even to Heller himself. On the surface there's the same sardonic wit and wry humor the detective is known for, but in the second half of the book there's also a level of maturity the reader hasn't seen from Heller before. Overall this has to be one of my favorites in the series.

NOT MY MOST FAVORITE IN THE SERIES

I love the Nathan Heller series but the stories are only as good as the popularity of the actual person he's working for. Author Collins always captures the feel of the era in which he writes, seamlessly weaving true historical people events around the fictional Heller. As for this one, I have ever been interested in or impressed by Amelia Earhart. I feel she made reckless moves in her aviation career. Just because you can fly a plane doesn't mean you have the experience and resources to take a raggedy plane around the world. If you like Earhart, you'll like this interesting take on her disappearance. Nathan is still skirt chasing in his usual charming way.