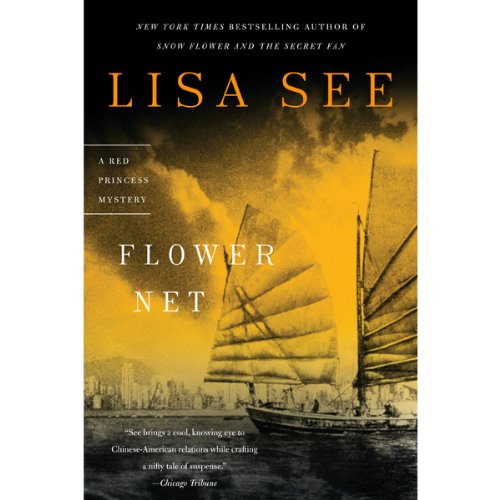 In Flower Net, Lisa See gives us a China not often seen: An extraordinary nation that is at once admirable and frightening. Here the veil is ripped away from modern China - its venerable culture, its teeming economy, its institutionalized cruelty - and the inextricable link between China's fortunes and America's is underscored.

In the depths of a Beijing winter, during the waning days of Deng Xiaoping's reign, the US ambassador's son is found dead - his body entombed in a frozen lake. Almost simultaneously, American officials find a ship adrift in the storm-churned waters off Southern California.

No one is surprised to find the fetid hold crammed with hundreds of undocumented Chinese immigrants - the latest cargo in the Chinese mafia's burgeoning smuggling trade. What does surprise Assistant US Attorney David Stark is his discovery that among the hapless refugees lies the corpse of a Red Prince, a scion of China's political elite.

The Chinese and American governments suspect that the deaths are connected, and in an unprecedented move they join forces to solve this cross-cultural crime. Stark heads for Beijing to team up with police detective Liu Hulan, whose unorthodox methods are tolerated only because of her spectacular investigative abilities. Their investigation carries them into virtually every corner of today's China, and leads them to Los Angeles's thriving Asian community - where their search turns up a bloodthirsty murderer at the apex of China's power structure. Their work together also ignites their passion for each other - a passion forbidden by their respective governments, and one that plays right into the hands of a serial killer.

An accomplished stage actress, Elaina Davis performed in Hamlet, and in Richard II and Troilus & Cressida for the New York Shakespeare Festival. She was a principal character on television's As The World Turns, and has appeared in the film Contact.

Please note: This edition is abridged.

What listeners say about Flower Net

The story sounds like it could be good, but the recording quality is very poor and it sounds as if some parts of the story are missing as the plot seems to jump from bit to bit unintentionally - obviously been no quality check undertaken on this baby!!!

Noisy backgroud, bad reader and hard to follow action make this book bad. Don't waste your money on it. It is nothing like Snow flower written by the same author-also steer clear of this reader. High pitched voice combined with no knowledge of punctuation, no inflection...Brr!

After thoroughly enjoying Snow Flower and the Secret Fan, I was eager to try out Lisa See's detective series. Flower Net was a big disappointment, starting with the quality of the recording - it is awful. There are skips, horrible background music and miserable vocal clarity. Trying to filter all that out, I wondered if this was even the same writer. The prose were very bland compared to "Snow Flower" and the plot wasn't great either. Perhaps the plot problem is the result of this abridged version (can't find the unabridged anywhere). Fortunately, I didn't let my disappointment with Flower Net stop me from trying out the second book, Interior, via the local audio library. Interior is much better, same character base but I feel like I'm reading the Lisa See of "Snow Flower" again.

Perhaps they should try to re-record Flower Net. unabridged, and dump the cheesy background music.

The worst recording ever

I listen to many books and have belonged to audible for years. This was BY FAR the most glitch ridden audio book ever! On top of that, the voices are sometimes accompanied by low-fidelity music that makes it harder to hear what is being said. I give up!!!! I won’t be able to finish this book.

Could not get attached to or care much about the characters. Did enjoy the picture of modern China and the lingering legacy of the Cultural Revolution.
Please get rid of the music throughout the story!

A pleasant book overall. I thought the narrator did a good job, but the music at the end and beginning of every chapter sometimes made it difficult to even hear the narrator, and always took away from the book.

What made the experience of listening to Flower Net the most enjoyable?

I am fascinated by the Chinese history and culture as portrayed by Lisa See and always enjoy her stories.

The plot twists and the view into the Chinese culture.

The voice of the narrator did not work with the different characters and I found the addition of the music to be distracting at the start of each chapter.

I would rate it somewhere in the middle of Lisa See's books.

I couldn't get through it due to the awful narration, which is why I can't rate the story. It's too bad, as this author and book was specifically recommended to me.

there should not be music

I REALLY didnt like the that there was music that popped up randomly during the reading. I felt like I was listening to a soap opera.

Lisa See’s story telling is superb. I experienced Elaina Davis as slow to bring her skill to the fore. Maybe five chapters until she synced with the story. Then and only then did she show her chops.

Regrettably the music accompanying the narration took longer to fit and support the book. Initially it was ill-fitting and the volume was too loud. Later is fitted better

I'm giving this book 4 stars. Although I have never read a Lisa See before so have nothing to compare with her other writings.
This is a romantic mystery who done it story. Takes place in China & California with a twist in Montana. Lisa includes the culture background of China which I found interesting. The Audible narrative was very good, especially with the pronunciation of the Chinese names was helpful. Enjoyed listening to this book. And plan on reading on of Lisa See's books. This book was picked by our Book Club.
Alana,
Colorado