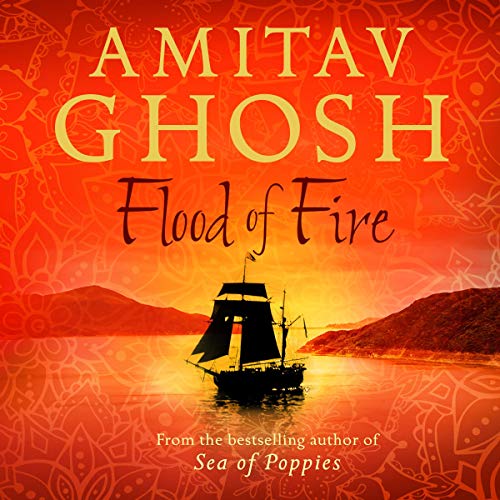 By: Amitav Ghosh
Narrated by: Raj Ghatak
Try for £0.00

The final book in the best-selling Ibis Trilogy from the author of Booker-shortlisted Sea of Poppies.

It is 1839, and tension has been rapidly mounting between China and British India following the crackdown on opium smuggling by Beijing. With no resolution in sight, the colonial government declares war. One of the vessels requisitioned for the attack, the Hind, travels eastward from Bengal to China, sailing into the midst of the First Opium War.

The turbulent voyage brings together a diverse group of travellers, each with their own agenda to pursue. Among them is Kesri Singh, a sepoy in the East India Company who leads a company of Indian sepoys; Zachary Reid, an impoverished young sailor searching for his lost love, and Shireen Modi, a determined widow en route to China to reclaim her opium-trader husband's wealth and reputation.

Flood of Fire follows a varied cast of characters from India to China, through the outbreak of the First Opium War and China's devastating defeat, to Britain's seizure of Hong Kong.

Flood of Fire is a thrillingly realised and richly populated novel, imbued with a wealth of historical detail, suffused with the magic of place and plotted with verve. It is a beautiful novel in its own right and a compelling conclusion to an epic and sweeping story - it is nothing short of a masterpiece.

What listeners say about Flood of Fire

I very much enjoyed the previous 2 parts of this trilogy, although I found it strange that they were so different in style. They shared strong story telling and good writing.
The final instalment is disappointing. I got the impression that it was written under duress or the scope of the work was too much in the end. The huge cast of characters are reintroduced, crammed by increasingly incredible coincidence into the crucible of conflict and then dispatched. It is completely lacking in character development and interest, which was so strong in the second book.
The affair between Cathy and Zachary made me cringe, being a particular low point.
The narrator manages to keep the characters distinct, although some of the voices were grating probably because the book was so poor.

I enjoyed immensely the trilogy. The story lines come together in a wonderful finale. The reader was the best I've heard. The characters came alive in his words. I would have liked to know what happened with two of the characters but may be this will come on a 4th book.

I didn’t want it to end!

From Sea of Poppies in which we are introduced to the growing of the poppies for the opium trade, through RIver of Smoke in which the Chinese try to eliminate the trade, culminating in the final book Flood of Fire - the British response, this story has been excellent. The author paints a vivid picture firstly of the rural people in India who are coerced & ch

Lots of historical detail about warfare but a fascinating finale of the opium wars stories.

Perfect finale to the trilogy!

What made the experience of listening to Flood of Fire the most enjoyable?

First, I just love Amitav Ghosh' storytelling. The first two books in the series sort of slowly built the characters, and it is no easy job combining everything into one single insanely awesome finale.

A must read from Amitav Ghosh. Though the ending was predictable, the way the characters were brought together was so intricately developed.

Would you try another book from Amitav Ghosh and/or Raj Ghatak?

I would definitely read books from Amitav Ghosh, but not those read by Raj Ghatak

What could Amitav Ghosh have done to make this a more enjoyable book for you?

Amitav Ghosh was brilliant. I just hated the way the book was read out. So I went ahead and bought the print copy, and read it.

As a Bengali, I would have expected Raj Ghatak (himself a Bengali) to read out Indian names and terms in a book written by a Bengali author without having to pronounce them with an American accent. For me, this completely ruined the feel of the book. I would not recommend this narration to anyone.

What character would you cut from Flood of Fire?

None. Everything was brilliant in the book.