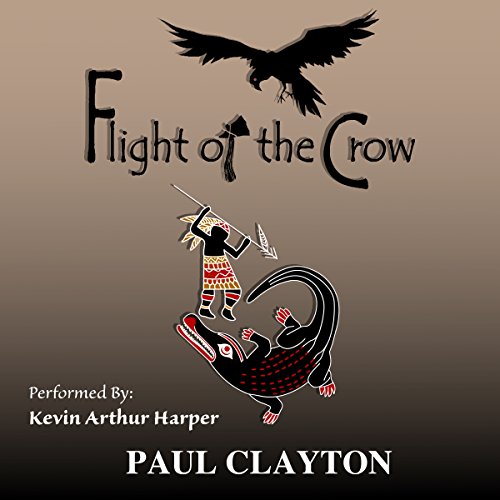 Flight of the Crow

By: Paul Clayton
Narrated by: Kevin Arthur Harper
Try for £0.00

Calling Crow travels down the Southeast coast in search of his wife, Juana, taken by the Spanish. He is captured and badly wounded by the Coosa people. Unable to care for himself, he is saved from a slow, painful death and nursed back to health by Green Bird Woman, who he grows to love. Adopted by the Coosa, Calling Crow becomes their chief.

One day word arrives that French Protestant colonists have settled to the north. Then, Spanish Catholic colonists settle near Calling Crow's village and he discovers that Juana is among them. The two European groups learn of each other's presence and make war plans. Now Calling Crow must prevent the coming battle from destroying his adopted people, and the two women he loves, one of which he must choose.

What listeners say about Flight of the Crow

After reading the first book in the series, Calling Crow, I was enthralled with the story and characters, and looking forward to more. How I've gotten it! And good news folks, there's a third one in the series that I'm headed for next.
GREAT STUFF. I love the story of Calling Crow's journeys, both physically and spiritually. In this one, Calling Crow travels SE in search for his wife. Along the way, he's captured and wounded by the Coosas, and one kind soul there nurses him back to health, he grows to be one of the Coosas, and then becomes their chief. After gently falling for the kind woman who saved him, he learns that his wife is part of another group in the area, but the two sides soon prepare for war, and Calling Crow is left trying to save his new people, and both of the women he cares for. Great story, great narration!! Would definitely recommend both Books 1 and 2, and can't wait to read/listen to the 3rd :)
I was given this free review copy audiobook at my request and have voluntarily left this review.

The saga of Calling Crow and his capture continues with his move to the Florida's and a new tribe. Through his story, we are able to see the struggle of the early Indian tribes fighting among themselves and with the Spanish and the French. The historical setting is interesting and the relationships are believable. I am definitely going to have to read book 3 so I will know how Calling Crow's story ends.
I listened to the audiobook version of this book and, once again, Kevin Harper impresses me. His ability to hook the listener with his narration, and characters is spot on. I enjoyed this performance very much and I have no doubt I will enjoy book 3, as well.

Crow is in search of his wife who has been taken by the Spanish.While searching he is helped by Green Bird Woman...who he falls for.A very well written story.Nice narration b Kevin Arthur Harper.“I was voluntarily provided this free review copy audiobook by the author, narrator, or publisher.”

Terrific Addition to This Series

FLIGHT of the CROW was such a great follow up to the first book CALLING CROW. It starts off strong and just gets better from there. Calling Crow is put in the middle of the Spanish and the French and I don't think he knew who to trust. He did however finally put his trust into the white man's God. I love his character. There's really good character buildup in this story including a few baddies such as Black Snake who wants to kill him. He loves Green Bird woman and feels loyal to Juana and tries to protect her. This was an action-packed listen and flowed very well. It was hard to stop listening. I love that Calling Crow now has a legacy and I look forward to seeing where the next part of his journey picks up. Great story by Paul Clayton.

Kevin Arthur Harper's performance was outstanding. He WAS Calling Crow. I liked the way he moved the story forward in a progressive way. He also did an impressive job with the dialect. He was flawless. This was an overall great listen and recommended.

This audiobook was gifted in exchange for my honest review.

I'm in love with this series!

Flight of the Crow is the second book in a series of 3. I loved the first book, Calling Crow, and was thrilled to find the second one was just as captivating as the first. Although historical fiction has never been a genre that I have explored, this book blew me away. The narrator made it come alive as if I was watching it on the big screen.....The story line is very well written and I found myself hanging on the edge, anticipating what would happen next! I highly recommend this book to anyone. I'm so looking forward to seeing how the story continues in the 3rd book.

No, others may not like it as I did. It is a good book about when there have been changes in the country and the way people must change with it

The author tells of the changing times and how we must look at others and see that they are just like we are. People. We are all the same and that we have different cultures and must learn to respect them as well as their people.

My favorite scene is when Falling Crow must explain the big dog to the people.

I chuckled and I cried. In one scene I cried when Juana, the priest and Calling Crow were in the dream place.