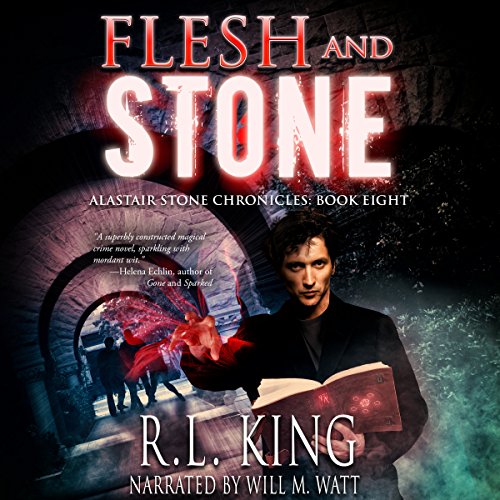 When mage Alastair Stone’s fiancée dumps him for loving magic too much and her not enough, he never sees it coming. Craving a change, Stone picks a big one: moving halfway around the world to teach occult studies at Stanford. He expects to pick up where he left off, resuming a quiet life of study and putting the past behind him.

But when a gang of cannibalistic serial killers targets the area, he’s certain their origin is supernatural. Drawn into the case after stopping a murder, he soon encounters a bizarre secret society that has its own reasons for wanting the murderers dealt with. But is the solution as bad as the problem?

With the killers hot on his trail, Stone must work with his odd allies to track them down before they strike again, and before he - or someone he loves - becomes their next victim.

This fast-paced standalone tale from the early days of Dr. Alastair Stone's magical career is perfect for new listeners and longtime fans alike.

What listeners say about Flesh and Stone

I have been a fan of this series but for me prequel‘s aren’t usually as entertaining. I was wrong and I’m so glad I took the time to read this book. It is a great stand alone and fills gaps in the series. But mostly it’s well written and very enjoyable. I recommend this book.

R L King is a fantastic and brilliant writer. Her books gets better and better. Well performed by Will M Watt. Dr Alastair Stone is a very interesting character,likeable and admirable. Good qualities. Fascinating personality. He goes all out to help those in need. I love this series and the books so far are very good. I hope Ms. King will continue more books in this series ASAP.

This is becoming my next series!

This series keeps getting better and better. I thought it would fizzle out, but is has not like the Iron Druid!

These books are in the line of Dresden and Verus. Finally, a book I can sink my teeth into.

However, this particular book should have been the first in the series.