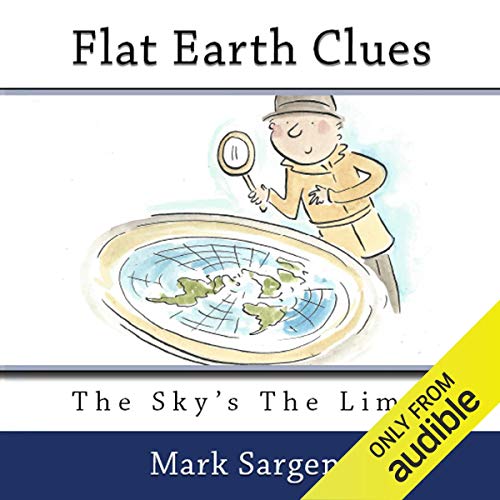 The Flat Earth Clues book gives you 12 compelling reasons why you should rethink the globe model that you have been taught. Before you were born, before your parents, your grandparents, before you even had a family line. There was the illusion, the trick, the lie that you lived on a small spinning rock flying through space. You thought it was true, because children don't believe in lies. And you grew up, and it was still true, because science is never wrong....

Except for small things like lead gasoline, lead paint, DDT, cigarettes not causing cancer, and what the core of the Earth looks like. You know that fire burns, water is wet, drop something and it falls to the floor. We can all test these things. What shape is the world? That's not something you know; it's something you're told. To put it simply, you just have to take their word for it. And there's the real crux of the problem: the weight of their word. It's really about trust. Most of us trust science to some degree.

It's about proving the Earth flat, but more importantly it's about disproving the globe, and that shouldn't be possible, but there are several big questions which science has a difficult time with. Why was there only one blue marble image used for 43 years? Where are the videos of the Earth rotating from space? Astronauts can't turn around in space with the camera running? Not even by accident? Are the Van Allen radiation belts dangerous? Why does the Orion "Trial by Fire" video exist? Why was the space shuttle program cancelled? Why does the Mars mission keep getting postponed? Why are they closing down the ISS? Why is Psalm 19:1 on Werner Von Braun's headstone? Why is the moon generating a light that is sometimes 12 degrees colder than the moon shade? How is that possible if it's reflecting the sun's rays? And if the moon is generating its own light source, then what was that dark grey thing we landed on? We can beam back crystal-clear photos of Pluto, but the global positioning system doesn't track planes in the southern oceans? And why does this topic, compared to any other, conspiracy or not, make people excited, angry, or scared?

Some of you are getting anxious just reading this! Why? Because it's the greatest trick of all, and we all fell for it. You should be excited, because it's going to change the world. You should be angry, because you were fooled your entire life, and you should be a little scared, because this is uncharted territory. This is the flat Earth theory that the world is easy to understand, more intimate, and very deliberate. It didn't just happen; it was built and, more importantly, built for you.

Mark Sargent oozes credibility and this audiobook is going to make me look mad when I try to explain it to my friends! What this audiobook does is show that if you take both world views on equal terms: flat v globular then flat earth theory does not end up looking crazy at all. Not for the closed minded.

I listened right through to the end including to two podcasts that were put in to pad it out. What is interesting is that this book exposes the human psyche and the gullible people who get hoodwinked by smooth talking fakers like Mark Sargent.

Informative, interesting and insightful: through an array of arguments, Mark Sargent debunks the globe, and he leaves you questioning why you ever believed in it and "space" in the first place.

This book opened my eye's.

We are brainwashed from kids, this book removes it, finally the truth. very well written, Mark Sargents you are a my new super hero.

NASA has basically made up every thing it has ever done. I had seen flat earth clues on YouTube I was very quickly turned from being a brainwashed idiot into someone who couldn't get enough information about it all. I have already converted 8 of my friends and family into knowing the world is flat and I will keep on repeating Marks words to many more. This is not a joke, the joke is all the lies we have believed since we where kids.
please listen to this awesome audio book.

Sargent is the man

Loved every bit of this, most part of this Ebook is available online with visual but ending interviews are good. Interview shows how so called scientists spit dummy out there mouth once they know they don't make sense.

Ace for me. Personally, I think all the 12 clues stack up well. Worth anyone's time.

It's all a great big lie.Maybe.

Yes, I enjoyed listening to this. The author interviews at the end were very interesting and you would think one could easily debunk this, yet it’s not happened. I’m going to look into this topic further. I’ve never believed the moon landings and I first became interested in the ‘earth’ when studying geography and learning that the maps we see on the wall of the continents are NOT DRAWN TO SCALE. But they let the general public (and continue to teach) that Africa is smaller than what it really is etc., It was at that point I realised that they lie. The government set the agenda and the teachers are paid to teach it. I can believe – especially after listening to this, that they could be lying about the shape of the earth too!

The author interviews at the end.

The interviewers were quite entertaining.

No. I had it on as I went about my life - to work, travelling.

This is not a book.

This is not a book but a series of podcasts and audio identical from a YouTube video. I'm very disappointed in this purchase because I already watched the video on YouTube before this. I expected this would be an actual intellectually written book. Other than that the ending was good with the Thirty dark radio interview.

This is just the audio track of Mark Sargent's Flat Earth Clues YouTube series. It's a total waste of money with very poor production values.

I just paid for a podcast recording?

Very interesting subject matter, but this book is just a compilation of YouTube videos and podcasts. All of the content is available online free of charge. I was expecting new content. I would have rather spent my money on something else.

The Earth definitely isn't a ball; but who knows?

The Earth definitely isn't a ball; but who knows what it may be? There's obviously way more actual scientific experiment proof that the sphere Earth model paradigm or theory just doesn't match the reality that we can actually see and measure. Scientism can only give you a lot of very complicated mathematics no regular person can understand; sometimes they themselves admit they don't understand. Flat Earth believers have done enough. Now it's up to that scientist on the sphere Earth side actually provide clear understandable experiments without a bunch of extremely complicated mathematics that are only numbers on a page; not physical observable measurements like the flat earthers have. Also Without using CGI but actual photos. Forget about flat earth just prove understandably using actual evidence that the earth is a sphere spinning 1000 mph. Circling the sun. Btw. The Michaelson Morley experiment proved many years ago that the earth is not moving at all.

You either are open-minded or NOT. For those open-minded enough this is good information to an alternative view of our world...our Earth.

Science, science fiction, fantasy, and there is this book

Loved this Book. So Informative. Please Research Flat Earth and other Conspiracies you've been Indoctrinated with

Fantastic approach , loved the content except the commercials in the last hour. Keep it flat.

Where does Flat Earth Clues rank among all the audiobooks you’ve listened to so far?

This is one of the most fascinating things I’ve ever listened to. I’m left confused because I don’t understand how the scientist couldn’t explain ‘science’ and just win the argument. You would think its easy. But I’ve been asking people ‘how do you KNOW the earth is a globe?’ and they say ‘the pictures’. I’ve said ‘but they’re CGI composite images’ – and then they’ll try and argue about ships going over the horizon – I say ‘no, use a stronger zoom and you’ll see the ship again’ and then they may say they’ve seen the curve from a plane – and I’ll say, I’ve been in a plane… the horizon is flat. And no one can answer it. Some people actually think the moon rotates on its axis! The moon doesn’t rotate! What are we teaching the children of today in the classroom? I’m amazed and stunned. Shocked and in disbelief. It’s a range of emotions. I don’t even know where to take this information. Am I losing my mind?!