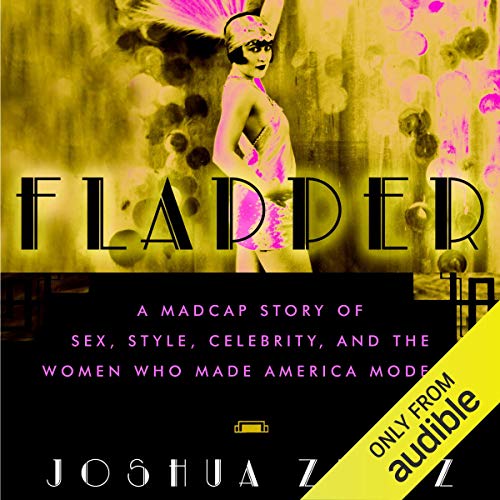 By: Joshua Zeitz
Narrated by: Daniella Rabbani
Try for £0.00

Historian Joshua Zeitz gives us over 11 hours of stories, facts, and fun about the women of the roaring '20s in America. From the first words of the introduction, listeners will realize that this is no dry history lesson. Daniella Rabbani's raspy voice is so friendly and personable it is more like listening to a friend with a fabulous repertoire of stories up her sleeve.

Whether relating what the rules of dating was like in the '20's (and how those rules were broken), or chronicling the lives of some of the era's brightest stars, this audiobook is a wonderful, colorful and comprehensive history of the country's first sexual revolution.

Blithely flinging aside the Victorian manners that kept her disapproving mother corseted, the New Woman of the 1920's puffed cigarettes, snuck gin, hiked her hemlines, danced the Charleston, and necked in roadsters. More important, she earned her own keep, controlled her own destiny, and secured liberties that modern women take for granted. Her newfound freedom heralded a radical change in American culture. Whisking us from the Alabama country club where Zelda Sayre first caught the eye of F. Scott Fitzgerald to Muncie, Indiana, where would-be flappers begged their mothers for silk stockings, to the Manhattan speakeasies where patrons partied till daybreak, historian Joshua Zeitz brings the era to exhilarating life.

This is the story of America’s first sexual revolution, its first merchants of cool, its first celebrities, and its most sparkling advertisement for the right to pursue happiness. The men and women who made the flapper were a diverse lot. There was Coco Chanel, the French orphan who redefined the feminine form and silhouette, helping to free women from the torturous corsets and crinolines that had served as tools of social control. In California, where orange groves gave way to studio lots and fairytale mansions, three of America’s first celebrities - Clara Bow, Colleen Moore, and Louise Brooks - Hollywood’s great flapper triumvirate - fired the imaginations of millions of filmgoers. Towering above all were Zelda and Scott Fitzgerald, whose swift ascent and spectacular fall embodied the glamour and excess of the era that would come to an abrupt end on Black Tuesday, when the stock market collapsed and rendered the age of abundance and frivolity instantly obsolete.

With its heady cocktail of storytelling and big ideas, Flapper is a dazzling look at the women who launched the first truly modern decade.

What listeners say about Flapper

The content of this book is very interesting, however the narrator is truly awful. I feel sorry for the author; all that work ruined in minutes.

Please, please, re record this book!!!!!

If Jordan narrated A Brief History of Time...

What disappointed you about Flapper?

What was one of the most memorable moments of Flapper?

The dawning realisation that the appalling narration rendered the book unlistenable-to.

It could not have been worse.

The writing seemed to be very good.

It is inexplicable to me how someone can narrate a fine book so badly and yet no-one involved in the production process seems to notice.

If you could sum up Flapper in three words, what would they be?

What was one of the most memorable moments of Flapper?

Much good information about the Jazz age, Zeitz writes in an interesting way that keeps the reader engaged.

Would you be willing to try another one of Daniella Rabbani’s performances?

Absolutely not. Rabbani made an interesting topic almost unbearable.

An interesting book, certainly worth reading THE PRINT VERSION. However, the narrator reads the book as if she's auditioning for a role on a soap opera. In a non-fiction book it is good to have a narrator breathe some life into the quotes of the people being written about. But Rabbani gives such a melodramatic reading to even the narrative portions that it is distracting and annoying. She sounds at various points of the narrative like a gossip columnist dishing the latest dirt, a stereotypical 80's valley girl from a bad movie, and a grade school teacher trying desperately to engage her disinterested students. Her reading style might suit a kids' fairies book, but it doesn't suit non-fiction.

To be fair, she does settle down a bit after about the 3rd hour, as if someone listened to the tapes and told her to tone it down, but by then the melodrama (which gets so out of hand at times that Rabbani stumbles over phrasing) and mispronunciations (including but not limited to such as "indigNITTY" for "indignity," "jew-ler-ry" for "jewelry," and the four-syllable version of "mischievous" with the extra "eee" sound), make it all a chore to slog through. As I said above, definitely worth READING the book, but do yourself a favor and skip the audiobook.

The author of this book has a lot of great research and insights into this period. However there are still some areas where he is drawing from debunked sources. The area this is the most glaring at is when he discusses women’s fashion in the 19 century. I spent most of this chapter cringing over all the blatant miss information and out right lies that was presented.He presents the long misconception that tight lacing was a thing all women did and that women’s clothing was restrictive and uncomfortable. While a lot of women do suffer for fashion even today it is extremely stupid to think that every woman in the world wear uncomfortable clothing all the time when they did everything from work to leisure. Tight lacing was not a real thing except with perhaps 1% of the female population who spent all their days doing nothing.For god sake’s I am so sick of hearing all this fake medical information about the dangers of women’s corsets and clothing from this time that have been proven to be false. Not to mention his descriptions of women’s clothing are comical at best. I was all set to give this book 5 stars until this chapter came up. I will not in good faith give a five star rating to a book that contains blatant miss information and lies. One last thing most of the misinformation about corsets in the 19th century was made by men who wanted to discredit an industry that was predominantly made up of women, or was satire.
Poorly done.

Fascinating chronicle of the flapper's evolution, not only covering literature and silent film stars who created her image, but also the advertising, politics and socioeconomic factors that shaped the flapper. Some disturbing historical/social highlights are covered that are not for the faint of heart; there are certain parts that lingered sadly in my mind for days, so be ready for the crushing truth of this era. Converesely, I also felt elated, inspired and excited to seek out flapper films, vintage ad photos and the biographies of silent film stars! I'm also now planning on reading the books of those wild Fitzgeralds. I feel that I just took a crash course in the Jazz Age. :) Wonderful.

Very informative and a good read, however

Good research went into it, however at some points it felt rushed or like it had poor organization to it. But I would recommend it cause I did enjoy learning about the topic.

Interesting read! Told story of different people from different industries who started this age of the flappers.

The narrator read well-enough, but I got really tired of her verbal exclamation points. I highly doubt Mr. Ford! spoke! in a high-pitched!, Excite!-ed! VOI-CE!! Really well-written, though and quite interesting!

Wonderful history of the 1920s

I really liked this. It was informative and entertaining. The narrator had irksome mispronunciations in a number of places, but that’s a peeve.

Interesting facts, but the narrator...

Would you try another book from Joshua Zeitz and/or Daniella Rabbani?

The book itself is interesting and I would definitely read another by this author. However, I would avoid this reader as her timing and inflection are downright bizarre! I would have to say passages back to myself to fully understand what the writer was trying to say. If you like lots of ...'s in your narration, then this is the narrator for you.

There wasn't exactly a central character in this book, since it's more a commentary on era, but I did enjoy learning about Colleen Moore and Lois Long.

Who would you have cast as narrator instead of Daniella Rabbani?

Was Flapper worth the listening time?

Yes - very educational about many aspects of the twenties and the years leading up to that decade.

Aside from the fact that it's mainly a Zelda & F. Scott Fitzgerald biography, the narration is so distracting that I only made it about halfway through. I understand there are probably a lot of quotes and excerpts to read in this book, but she emphasizes phrases in the most bizarre and incongruous ways that makes it sound like every other word is italicized or in quotes. Very disappointed, could have been a fun book if there had been more history.

As an historian interested in social movements, this book offered a wonderful insight into the many women who first broke the old Victorian-Edwardian mold and threw the pieces out the window.