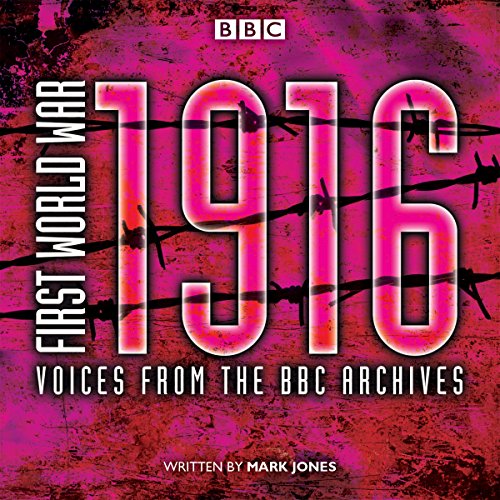 A unique collection of historic recordings covering the events of 1916, from the final evacuation of Gallipoli to the aftermath of the Somme. These fascinating and often poignant firsthand accounts describe the humiliating retreat by Allied forces from Gallipoli, starvation during the Siege of Kut-al-Amara in Mesopotamia, the Easter Rising - viewed from both sides of the Irish divide - and the costly battles of Jutland and the Somme.

At Jutland, the only full-scale fleet-to-fleet encounter of the war, 6,000 sailors died. Survivors are haunted by memories of their drowning comrades, but it is the Somme which arouses the strongest feelings. Soldiers speak bitterly of the carnage and needless sacrifices as men were cut down 'like sickled grain'. With a final toll of over 600,000 Allied casualties and no decisive breakthrough, the battle marked the point at which hope began to fade.

Among the reminiscences, conscientious objectors defend their beliefs, the poets Edmund Blunden and Robert Graves offer their own distinctive observations on life in the trenches and a fusilier on the Western Front recalls meeting his new battalion commander, Lt-Col Winston Churchill.

Finally, David Lloyd George, looking back on 1916, remembers a 'dark and desperate' time for the country.