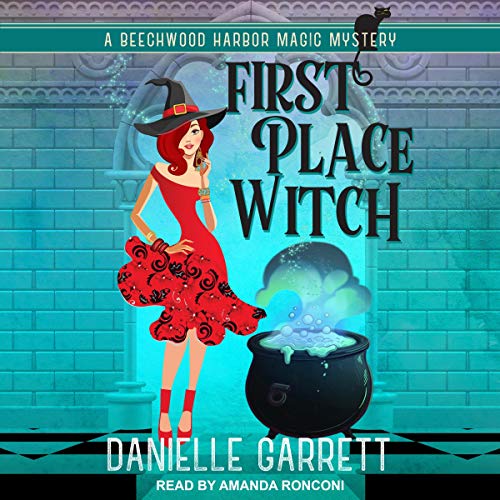 By: Danielle Garrett
Narrated by: Amanda Ronconi
Try for £0.00

It's the chance of a lifetime, but Holly's not sure she can survive the spotlight's harsh glow.

With her potions shop officially open for business, Holly sets off to the San Francisco Haven to compete with the most elite potions masters in the entire country. But what should be a fun and potentially life-changing experience quickly sours when Haven Council officials show up and start poking around Holly's workstation.

When one of the competitors is found murdered, all eyes swivel to Holly and her apprentice.

Holly doesn't know who killed the egotistical wizard, but she knows it wasn't her or Harmony. She also knows that there are some on the esteemed Haven Council who wouldn't hesitate to blur the lines of the investigation if it means getting rid of her once and for all.

Holly, Adam, Evangeline, and Harmony have to find the real killer before the clock runs out and Holly ends up wearing SPA handcuffs.

Had not listened to the series in some time and was fun to jump back in as Holly continues to try and establish herself and her business. As always the impulsive protagonist soon finds herself in the center of the trouble and once again being persecuted by those in the administration who see her as no good. The author rackets up the possibility for doom and gloom just enough to make the happily ever after ending feel like sweet relief. As always there is the twinge of man this really feels like harassment the way the agency goes after Holly, but she continues to build friendships and allies and there was less endangering those she loves and more realizing these individuals and relationships are growing and evolving and things in this world are shifting. Amanda does a superb job as always to create a whole cast of characters that draw you into the story. Definitely another win in the series and another good ending for Holly. For those seeking a fun supernatural mystery with drama, tension, and a clean wrap up with just enough teased at the end for the audience to want to continue the story without feeling cheated by cliff hanger.

I DON'T KNOW WHY AUDIBLE HAS LIMITED MY OPTIONS TO A SINGLE STAR, BUT THIS IS A 5 STAR READ FOR ME. THOROUGHLY ENJOYED IT!

I have been enjoying this series and look forward to listening to the next book!

I really like the series, great storyline, and as always I love the narrator. she does a great job on the characters.

And I hope it continues in Audible. The characters are fun and I like them all. Amanda Ronconi is a wonderful narrator; she has a pleasant voice. Which for me is a make or break. If I don't like the voice, I just won't continue listening. And she is also really good with all the characters. Anxious to see how it all plays out. I missed Nick on this round, but hope to see more of him in the future. Overall I really enjoyed this book. I like my stories to be somewhat light and enjoyable, especially these days!