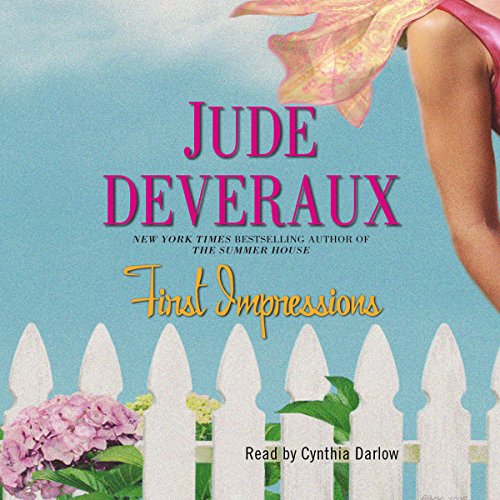 Eden Palmer knows how to make it on her own. This 45-year-old single mother has worked hard to raise her beloved daughter, Melissa, who has long been the jewel of her life. But there comes a time when a mother must come into her own. So Eden moves to Arundel, North Carolina, to take ownership of Farrington Manor. Her move is met with delight in some quarters, and jealousy in others.

Pursued by two eligible bachelors, Eden is flattered, and more than a little suspicious. Juggling the attentions of two men is hard enough, but soon Eden's bid to start over plunges her in the middle of a mystery that threatens not just her plans and reputation, but her very life. Can she use one man to save her from the other?

What listeners say about First Impressions

I was quickly hooked and enjoyed listening to this jolly tale immensely.

A world weary agent, a smart heroine, an old historic house in a beautiful sleepy little town in North Carolina. There is an old secret, lots of greedy people, guns and excitement but also beautiful interesting and involving descriptions of the house, life in the town, family relationships.

I was perfectly and very enjoyably entertained.

The reader is excellent!

The story is a good mystery and romance. The main character, Eden was very believable and not a mere youth. She had had full and bumpy life that carried forward to her present. The eighteenth century home she inherits from an older woman she knew is the center of much intrigue. You must read the story for more information.

The narrator makes terrible mouth noises while reading. I almost couldn't make it through the book!!!!

well read. another chapter of Arendelle completed. what is in store next for the sleepy little town. although I wonder why Stuart did not have his own cell phone.

Lovable, laughable, and some mystery.

Easy to listen to, funny at times and lots mystery and good looking men and a southern accent thrown in from time to time.

as. usual I adore Jude so it was a great story! can't wait to read my next!

Jude Deveraux is always a good romance read. That said, this is an ok book but nowhere near the quality of something like Knight in Shining Armor.

If you're looking for a nice book to relax with, this is just fine. I don't regret the credit, but I'm sure that I won't remember the plot for very long.

There was a fun story line but certainly not one of her best books.