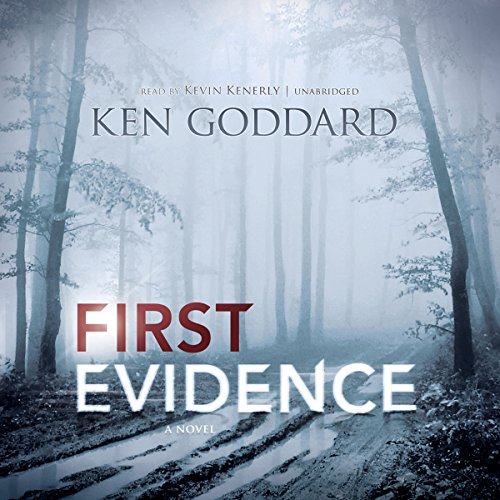 By: Ken Goddard
Narrated by: Kevin Kenerly
Try for £0.00

A down-to-earth forensics expert has just discovered a crime scene that is out of this world.

In criminal forensics they train you to uncover evidence, no matter how brutal or bizarre the murder. But what if one night you encounter a crime scene so terrifying that no one on earth can explain it?

It begins deep in the woods of the Pacific Northwest, at the site of a reported shoot-out. Investigator Colin Cellars cannot find a trace of perpetrator or victim - or even confirm that anyone has been killed. As he doggedly pursues the case, he realizes there is far more at stake here than murder. Someone - or something - will stop at nothing to prevent him from discovering the truth. For the truth is not “out there”; it is locked away in Cellars’ own evidence file. And the evidence points to a killer far outside Cellars’ experience - far outside any earthly experience. But who will believe one maverick cop?

From the New York Times best-selling author of Balefire comes a chilling tale of murder, forensic detection, and vivid speculation that pits a unique crime scene investigator against a culprit who may be unlike any this world ever spawned.

Ken Goddard is the author of Balefire, among other novels. He has served as a criminalist in three California police and sheriff’s departments and as an instructor in crime scene investigation and forensic techniques at law enforcement academies throughout the United States, as well as for Interpol. He lives in Ashland, Oregon, where he is currently director of the National Fish and Wildlife Forensics Laboratory, the only full-service wildlife crime laboratory in the world.

“First Evidence has great suspense, creepy atmosphere, and convincing nuts-and-bolts realism.  Ken Goddard has created an interesting take on an old problem and presented it with a ricochet writing style and commonsense characters.” (Kevin J. Anderson,  New York Times best-selling author)
“A stunner. A gritty, compelling novel I finished in one night. Goddard is really good.” (Earl Emerson, Shamus Award–winning author)
“Goddard nicely combines our instinctive fear of things glimpsed at the corner of the eye with the mind’s rational habit of assembling evidence and making logical inferences to lead the reader into unfamiliar and unsettling territory.” (Thomas Perry, Edgar Award–winning author)

What listeners say about First Evidence

Would you try another book written by Ken Goddard or narrated by Kevin Kenerly?

The narration by Kevin Kenerly made what would have been a listening ordeal merely unpleasent. His rolling, clear tones are perfect for audiobook narration, and I'll be keeping an eye out for stories narrated by him in future...just not ones written by Ken Goddard.

What was most disappointing about Ken Goddard’s story?

While the basic idea behind the story is a fun and interesting one, Ken Goddard's desire to be as technically accurate as possible bleeds any momentum out of the story, turning into a dry recitation of process and procedure interspersed with a pretty bare bones story and some rather forced action sequences. Characterisation is mostly non-existent and descriptive passages are limited to simple fact and surface detail. In a word, it's dull. I've listened to dozens of audiobooks, and with the exception of one very poorly read by Charisma Carpenter, this is the only one where I've been really tempted to simply give up and switch to something with more pace. In the end I stuck at it because I wanted to assure myself that it wouldn't get any better. It didn't.

If you could play editor, what scene or scenes would you have cut from First Evidence?

Were I to edit this story, I think I would have cut 60-70% of the technical detail. While it's interesting the first time to learn about crime scene investigation and procedure, it is less so the third or fourth time around When it takes three or four pages to describe a trip of less than a hundred yards in which absolutely nothing happens, tedium sets in.

By the end of the book--if you actually make it that far--you will be hating these words and phrases: alarm bells, spine-chilling, enticing, cold shiver, sensuous, seductive, shadow, shadowy, and dark figure.

If you're okay with mind-numbing repetition of words, here's a most basic plot of the book: Character discovers something weird/interesting. Immediately after discovery, exact weird/interesting thing happens. Character thinks it's completely normal and goes along with it until a violent yet EASILY AVOIDABLE situation happens. Character wonders why thing went wrong. Wash and repeat until you arrive at an underwhelming ending that was put off for 300 pages, or in this case, 10 hours.


ps: Give guys more credit, please. I would enjoy a story where a male character's personality and motivations ARE NOT rendered obsolete the second a woman's naked breast is within eye shot.

pps: don't ever allow Kevin Kenerly to voice a 'Sassy Black Woman.' again. EVER. Whoever allowed him to continue in that agonizing, embarrassing, and quite frankly offensive manner should be fired. My soul left my body every time Sassy Black Woman came into the book and I am now a soulless husk on my journey to hell.

I thoroughly enjoyed this from the start. It moves fast and keeps you interested with the facts of the forensic investigation and then the UFO connection. I will go on to the next one in the series. I didn't know it was a series until i started it, and I rarely do series as they can lose their way after the first one and leave you disappointed but this was good and warrants going on. I happened to have the book also and there is a "map" of the evidence location as well as a detailed list of items that help to visualize the layout, but it may not be necessary to enjoy the book after the initial setup.

Bath? Can I take this in with me?

I didn't want to stop listening!

I lost track of Ken Goddard a few years back and was excited to find him on Audible. OMG this was such a deviation from the older books I read. I thoroughly enjoyed it and can't wait to read the next!

They're here! and they're running out of time!

Certainly, it's a cross between Scifi and Horror wit just a little humor thrown in.

What other book might you compare First Evidence to and why?

The Second Ship, which is about three friends finding an Alien space craft. Both stories are about the impact of aliens among us.

What does Kevin Kenerly bring to the story that you wouldn’t experience if you just read the book?

He has a subtly different impact and interpretation of the main character. Both are valid but I find it interesting to hear the difference.

Actually no, there are some natural breaks in the story. Which all in all adds to the story, more to the point how I listen to the story.

While I did enjoy reading his " Prey " series more, First Evidence lends itself more to listening.

Leave it to Goddard to make a love story from an ET story. Didn't read the first book in the series don't need to. This ride you want me to take with you down this winding ET road lost me along the way it was hard to find my way back. In fact, I only found clarity in the end.

First Evidence-I never did figure out what first evidence the title referred to- is an average UFO/missing persons/Aliens all around us, type novel which takes place in rural southern Oregon. If you really enjoy forensic evidence and alien theories and extraneous information about old guns, you might enjoy the story..I found it to be barely average in plot though it might be made into a good movie because the primary protagonist continually sees shadowy mysterious creatures creeping up on him, it didn't really grab me as a scary story when read.

Kevin Kenerly the narrator didn't do much to add excitement to the plot either. Most of the mens parts sound the same and he can't do a woman's voice at all...he would have been better off simply reading the story without trying to do different voices. The few places where humor might be injected were lost on him.

The story arc is simplistic-a town in he boonies of Oregon is up in arms because there has been a rash of missing people, signs of UFO lights and strange happenings. The main protagonist, an Oregon State Patrol forensic expert has moved to this community to be close to two old friends. This part of the plot is pretty trite-the author wants to inject some romance and does a bad job of it..He'd have been better off sticking to a straight Aliens and UFOs story.

His old friend goes missing in a bloody massacre that includes a dog being killed-lots of detail here about blood and guts-again good movie stuff but not something I care to imagine-and strange disfigurement done to the body of the friend. There is a rash of exploding cars and a totally comic Captain of the OSP who rants and raves and kicks things. Very contrived exploding things that would play well in a movie, but which reader Kenerly made dull.

On and on we go, with a young girl who looks like his old girlfriend, a lackluster back story about the aliens which really needed to be fleshed out more and what tries to be an exciting ending, but fails. Lots and lots of detailed info on guns in the book-if you're a gun nut, this might appeal but to me it was useless information what size a bullet is and how fast the bullet goes-like who cares?

The book was on sale-I got it cheap and I'm glad I did, because it wasn't worth buying, in my opinion. I enjoy books about aliens, good sic-fi and First Encounter stories, but this tale wasn't worth a credit.