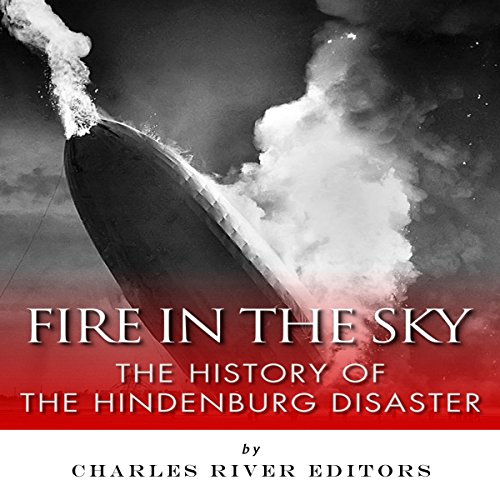 Fire in the Sky

The History of the Hindenburg Disaster
By: Charles River Editors
Narrated by: Jairus Amar
Length: 1 hr and 28 mins
Categories: History, 20th Century
3 out of 5 stars 3.0 (1 rating)

Fire in the Sky

"It's burst into flames! Get this, Charlie; get this, Charlie! It's fire... and it's crashing! It's crashing terrible! Oh, my! Get out of the way, please! It's burning and bursting into flames and the... and it's falling on the mooring mast. And all the folks agree that this is terrible; this is the worst of the worst catastrophes in the world...its flames... Crashing, oh! Four or five-hundred feet into the sky and it...it's a terrific crash, ladies and gentlemen. It's smoke, and it's in flames now; and the frame is crashing to the ground, not quite to the mooring mast. Oh, the humanity!" (Herb Morrison's broadcast of the Hindenburg disaster)

Societies across the globe are incredibly thankful for all the modern devices and opportunities that have been developed over time, including the cars and planes that have allowed people to travel long distances in short times, but it is often easy to forget that all these advances came with a price. Car accidents and plane crashes leave the headlines almost as quickly as they enter them, in part because they're recognized as the kind of things that occur with technological advances.

That was not the case, however, with the Hindenburg disaster. On May 6, 1937, the famous passenger zeppelin burst into flames while attempting to dock in New Jersey, and the horrific scenes were captured on film and broadcast over the radio. The Hindenburg was carrying nearly 100 people and was still hundreds of feet in the air when it caught fire, so the fact that only 35 people died between the fire and the airship plummeting to the ground was much lower than it could have been.

Stay away from this book!

While the book itself is tolerable, the reader is too monotonous and boring. Stay away from this book like the plague!

What would have made Fire in the Sky better?

I love non-fiction, but I didn't make it past the first 15 minutes of this. The narration make it painful - like nails on a chalkboard.