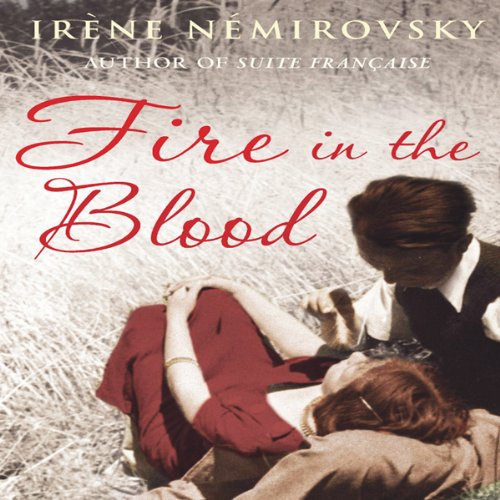 Fire in the Blood

Fire in the Blood

A morality tale with doubtful morals, a story of murder, love and betrayal in rural France, Fire in the Blood, written in 1941, is set in a small village, based on Issy-l'Evèque where Suite Française was written. It brilliantly prefigures the village community in her later masterpiece.

An old man looks back on a chequered life, concealing truths he will not reveal until the end. Fire in the Blood starts quietly, lyrically, but then races away with narrative twists and surprise revelations. A young man, newly married, is found drowned in the mill stream; an old man is more concerned about the repayment of a debt than with his young wife; a young woman asks Silvio to plead her case; no-one is quite as they seem. Young women have to marry old men, youthful passions burn, and the regrets of old age simmer in this rural community where secrets are kept close and passed from one generation to the next.

Némirovsky looks at her characters, both young and old, with the same clear-eyed distance and humanity she displayed in Suite Française, unpeeling layer after layer. Atmospheric and haunting, Fire in the Blood is a gripping literary find.

This perfect novella explores human love, love that 'breathes in the other's heart,' love that is tortured and jealous. The story told in 1938 by old Silvio concerns covert passions in the Burgundian village of Issey-l'Eveque... Jim Norton's rich voice captures the burning embers of the love and hatred that glow through the story. His narration of Silvio's final musing stops all the clocks."(The Observer)

"The way a man drinks in company tells you nothing about him. But the way he drinks when alone reveals, without him realising it, the very depths of his soul." Irène Némirovsky was a successful novelist between the wars, whose distinctive voice was rediscovered with the emergence of Suite Française, an unfinished manuscript cut short when she was sent to Auschwitz. Now an earlier unpublished novella, Fire in the Blood, has been unearthed. Narrated by Jim Norton, who can get into character as if he is slipping on gloves, it lends itself wonderfully to being heard. The theme of shared secret memories unfolds like a peeled onion, framed by descriptive passages of rural France as vivid as paintings.(The Times)

Given its provenance, Suite Française (Némirovsky's half-finished bestseller about the German occupation of France, published 60 years after she died in Auschwitz) was less a hard act to follow than an impossible one. But no, the manuscript of another novel, written in 1932, has turned up, every bit as good if not better than Suite Française, first because it's complete and second because it's read by Jim Norton. It's a love story (or rather a succession of dangerous liaisons) set in the same rural area as the latter half of Suite Française, where land is more important than love, family feuds are passed down the generations and every isolated farmhouse has a secret. Great plot, wonderful characters, lucid prose - well, why not? Némirovsky was Russian.(The Guardian)