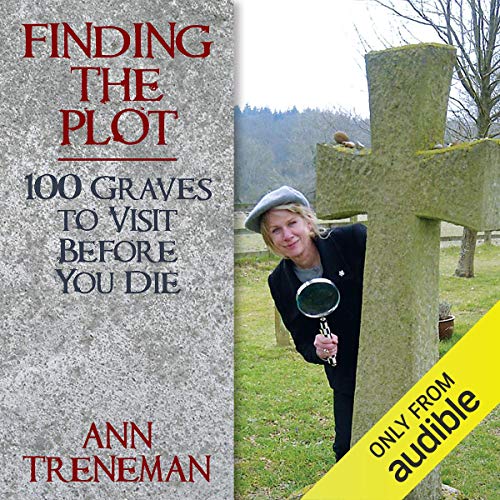 By: Ann Treneman
Narrated by: Lucy Paterson
Try for £0.00

Ann Treneman, Political sketch writer for the Times, spent about four years doing what she’s termed "graveing". She traveled around Britain asking people what their favorite graves are, tracking down the most interesting dead people and the most iconic, historical, and architectural graves. She found that "people with interesting graves were exactly that themselves". Trying to keep this strange travel guide fun, she stayed away from recent graves and murder victims, using the monuments to embrace life, not death. Lucy Patterson performs the audiobook with a smile and a wink at the conceivably morbid subject matter that makes one imagine a wry sort of Miss Marple investigating the "plots" of Britain.

Completely off-the-wall, It's a Plot is a fascinating geographical and historical journey around Britain. The Tibetans have the Book of the Dead. This is Ann Treneman's Book of the Dead Interesting. The Times writer, best known for her hilarious parliamentary sketches, has branched out - to graveyards.

In this riveting book - part travelogue, part biography, part social history - she takes you to the best graves in Britain. You'll meet the real War Horse, the best funambulist ever, Byron and his dog Boatswain, prime ministers, queens and kings, Florence Nightingale and her pet baby owl Athena, highwaymen, scientists, mistresses, the real James Bond and, of course, M. Then there are writers, painters, poets, rakes and rogues, victims, the meek and mild - and the just plain mad.

This unique book is made up of 100 entries, each telling the story of one or more graves. Some of the graves are chosen for who is in them, others for the grave itself. Some of the entries are humorous, some are poignant, but all tell us something about the British way of death. At times absurd, at times astounding, in It's a Plot, Ann Treneman proves an excellent guide to the Anglo-Saxon underworld!

What listeners say about Finding the Plot

Interesting idea, but alas was rather dull

On reading the publisher’s summary this appears to be an interesting and unusual audiobook, but alas there are two main issues:

i) Lucy Paterson, the narrator, has a great clarity to her voice though sadly it lacked any warmth or humour. To some this may not pose a problem, but with an audiobook of nearly 8 hours it needs to be told in an interesting way otherwise it can easily just become background noise.

ii) The publisher’s summary said “part travelogue”, well this is technically true, but it should read very small part. Therefore the book lacked any contrast and quickly became a repetitive history lesson for each of the graves residents and what with the bland narration the last few hours seemed to never end.

Some people may find this to be the bestest audiobook ever, but I do implore you to listen to the sample first and consider whether you could listen to 473 minutes of it.

What made the experience of listening to Finding the Plot the most enjoyable?

Loved it. History and humour in one book.It is not so much a story as a monologue.

What other book might you compare Finding the Plot to, and why?

None, it is unique.

What would have made Finding the Plot better?

got the names of places correct

Would you ever listen to anything by Ann Treneman again?

doesn't know about where she is talking about, just for starters the Bront'e sisters are at
HOW-WORTH not HAY-WORTH,

A bit left field but this is an amazing book. The Hardy Tree and Lord Sutch's final resting place on my to do list, as is a trip to Westminster Abbey.

Not macabre at all,but a celebration of people's lives