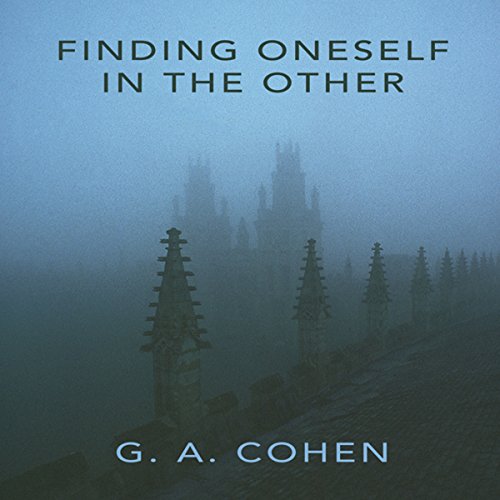 Finding Oneself in the Other

By: G. A. Cohen
Narrated by: Bernard Clark

This is the second of three volumes of posthumously collected writings of G. A. Cohen, who was one of the leading, and most progressive, figures in contemporary political philosophy. This volume brings together some of Cohen's most personal philosophical and nonphilosophical essays, many of them previously unpublished. Rich in first-person narration, insight, and humor, these pieces vividly demonstrate why Thomas Nagel described Cohen as a "wonderful raconteur".

The nonphilosophical highlight of the book is Cohen's remarkable account of his first trip to India, which includes unforgettable vignettes of encounters with strangers and reflections on poverty and begging. Other biographical pieces include his valedictory lecture at Oxford, in which he describes his philosophical development and offers his impressions of other philosophers, and "Isaiah's Marx, and Mine," a tribute to his mentor Isaiah Berlin. Other essays address such topics as the truth in "small-c conservatism", who can and can't condemn terrorists, and the essence of bullshit. A recurring theme is finding completion in relation to the world of other human beings.

Engaging, perceptive, and empathetic, these writings reveal a more personal side of one of the most influential philosophers of our time.

"For those who never had the good fortune to know Jerry Cohen, these essays supply unparalleled insight into his wider moral and political commitments and cultural sensibilities. And for those of us who did have that good fortune, this volume provides cherished reminders of the singular value of his friendship, of the profound contribution that he made to our understanding of what matters, and of just how damn funny he so often was. The debt owed to Michael Otsuka for his editorial labors continues to grow." (Hillel Steiner, professor emeritus, University of Manchester)
"As well as being an amazingly gifted political philosopher, Jerry Cohen had an extraordinary sense of humor and humanity. This wide-ranging volume combines brilliant philosophical analysis with memorable personal reflection on a host of subjects, including poverty in India, Israel today, and even the origins of French bullshit. Finding Oneself in the Other casts unprecedented light on why Cohen was not just widely admired but loved." (Andrew Williams, ICREA and Universitat Pompeu Fabra)
"This is an unusually personal collection of philosophical essays, full of perceptive observation and sharp reasoning intermingled with irresistible humor and contagious tenderness. Anyone reading these pages will understand why both Jerry Cohen's philosophy and his radiant personality have meant and will keep meaning so much to so many people." (Philippe Van Parijs, Université de Louvain and Nuffield College, University of Oxford)

What listeners say about Finding Oneself in the Other