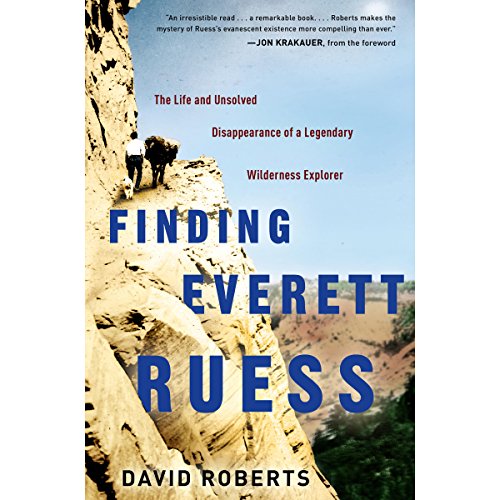 The Life and Unsolved Disappearance of a Legendary Wilderness Explorer
By: David Roberts
Narrated by: Arthur Morey
Length: 13 hrs and 8 mins
Categories: Biographies & Memoirs, Celebrities
5 out of 5 stars 5.0 (2 ratings)

Finding Everett Ruess is the definitive biography of the artist, writer, and eloquent celebrator of the wilderness whose bold solo explorations of the American West and mysterious disappearance in the Utah desert at age 20 have earned him a large and devoted cult following. More than 75 years after his vanishing, Ruess stirs the kinds of passion and speculation accorded such legendary doomed American adventurers as Into the Wild’s Chris McCandless and Amelia Earhart.

“I have not tired of the wilderness; rather I enjoy its beauty and the vagrant life I lead, more keenly all the time. I prefer the saddle to the street car and the star sprinkled sky to a roof, the obscure and difficult trail, leading into the unknown, to any paved highway, and the deep peace of the wild to the discontent bred by cities.” So Everett Ruess wrote in his last letter to his brother. And earlier, in a valedictory poem, ”Say that I starved; that I was lost and weary; That I was burned and blinded by the desert sun; Footsore, thirsty, sick with strange diseases; Lonely and wet and cold . . . but that I kept my dream!"

Wandering alone with burros and pack horses through California and the Southwest for five years in the early 1930s, on voyages lasting as long as ten months, Ruess also became friends with photographers Edward Weston and Dorothea Lange, swapped prints with Ansel Adams, took part in a Hopi ceremony, learned to speak Navajo, and was among the first "outsiders" to venture deeply into what was then (and to some extent still is) largely a little-known wilderness.

When he vanished without a trace in November 1934, Ruess left behind thousands of pages of journals, letters, and poems, as well as more than a hundred watercolor paintings and blockprint engravings. A Ruess mystique, initiated by his parents but soon enlarged by readers and critics who, struck by his remarkable connection to the wild, likened him to a fledgling John Muir. Today, the Ruess cult has more adherents—and more passionate ones—than at any time in the seven-plus decades since his disappearance. By now, Everett Ruess is hailed as a paragon of solo exploration, while the mystery of his death remains one of the greatest riddles in the annals of American adventure. David Roberts began probing the life and death of Everett Ruess for National Geographic Adventure magazine in 1998. Finding Everett Ruess is the result of his personal journeys into the remote areas explored by Ruess, his interviews with oldtimers who encountered the young vagabond and with Ruess’s closest living relatives, and his deep immersion in Ruess’s writings and artwork. It is an epic narrative of a driven and acutely perceptive young adventurer’s expeditions into the wildernesses of landscape and self-discovery, as well as an absorbing investigation of the continuing mystery of his disappearance.

In this definitive account of Ruess's extraordinary life and the enigma of his vanishing, David Roberts eloquently captures Ruess's tragic genius and ongoing fascination.

"Everett Lives! If not in a desert canyon, then at least among the pages where David Roberts brings the young man's life and legend all together: his writings and art, his kinship with nature, his love for adventure and beauty, and the yet-evolving mystery of his disappearance. Count me one among many inspired by a young adventurer who lived in beauty and left us too soon. May we never stop wandering." (Aron Ralston, author of Between a Rock and a Hard Place and subject of the film 127 Hours)
"Roberts deftly..captures the complexity of his subject." ( Publishers Weekly)

Very much worth checking out.

I dont know how I came across this selection in Audible because I didn't search for it and I had never heard of Everett Ruess but nevertheless I saw it and thought it sounded interesting. I was not disappointed. I found the real life story fascinating. The story of Everett is full of adventure followed by the mystery of his disappearance and the conflict(s) that follows. Its sad that his life ended at such an early age. I think most people will enjoy this audiobook.

What character would you cut from Finding Everett Ruess?

I wanted to like this book. I love the story of a young man who casts aside the concerns of the world in search of something personally greater and deeper, but Everett Ruess really disappoints me as a person. I struggled to even finish this book due to my complete dislike for him as a person. He spent his time wandering around judging society, while requiring it's existence and the support of people who "bought in to the system" so that he could selfishly wander and do what he pleased. He was a detestable character and to be honest, he could have been a much more prolific explorer and vagabond. The book was well written and meticulously researched, but being that the central character of the story was a selfish child, I would never recommend people read the book. I am frankly amazed that there is such thing as "the cult of Everett Ruess". I would love to know what these people find so attractive about being a self-absorbed leech who casts stones at the very house that supports his mindless wandering.

5 of 6 people found this review helpful

A great story few no about!

I went into this with no idea of who Everett Ruess was, but by the time I finished I felt like a kindred spirit. Over the course of thirty years I have been going into the wilderness of southern Utah to discover the Anasazi ruins and beautiful canyons and have written my own novel "Anasazi Dreams" about the area. There are so many parallels to our stories that I found it spooky. In his short life Everett did so much as an artist and outdoorsman. The book gives details of his family. what may have become of him. Yet, it is his own writings that touch the soul. A great book.

A mystery with great details

I heard about Everett Ruess from reading Into The Wild. I do not have a diary but hearing the desparate inner lives of others is fascinating and the author's dedication to the story is much appreciated.

Exhaustive Details of the search for Everett which never exhausted this listener. Amazing effort to lay out as much evidence as possible. A most-excellent listen.

I was looking forward to this book on Ruess. The performer is horrible. I forced myself to get through the "Forward" but could not abide any more of the snake like voice of Arthur Morey. I will avoid any other performances by this reader. I gave the story three stars because I could not stand to listen long enough to review it. This review form required a response.

Who would you have cast as narrator instead of Arthur Morey?

I love books about true characters but this was extremely boring and slow. Wish I hadn't wasted my money and time with it.