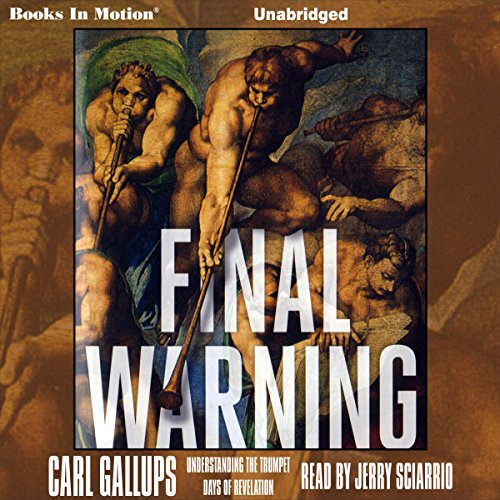 Tsunamis, earthquakes, world wars, nuclear disasters, and upheaval in the Middle East - could it be we are living in the final trumpet days of Revelation? Whether one is a believer or not, the Bible provides many clues about the future of us all.

In Final Warning, beloved pastor and best-selling author Carl Gallups explores the stunning visions of the Apostle John as found in the seven trumpets of Revelation and overlays them on major events in the 20th and 21st centuries. How do the two world wars line up with John the Revelator's visions? Could it really be that the Chernobyl meltdown was foretold in the Bible almost 2,000 years before it happened? Does the rebirth of Israel indicate the last days are upon us? Was the same Apollyon mentioned in "trumpet five" responsible for the darkening of the sky during the Gulf War? Is the United States mentioned in biblical prophecy?

Gallups has scoured historical, military, and journalistic sources to address these questions and more. An incredible journey of contextual biblical understanding and astounding prophetic possibilities await as you discover why today's signs could be the final warning.

Really enjoyed this audio book, captures the listeners attention from chapter one. Highly recommend this.

Amazing Well Written Informative Book, I Thoroughly Enjoyed it. Bill Haile Sr, author of A Walk in Assurance Sustained By Faith and A Time Of Awakening the David Cross Chronicles.

Well referenced book. I enjoyed it so much that I finished it in 2 days & am now reading it again for 2nd time. I turned the speed of the narrater up to 1.15 and got thru it
quick (love this feature in Audible)
I never watch or listen to things more than once BUT I loved this book. I think Carl Gallup is right
about so many things in the book