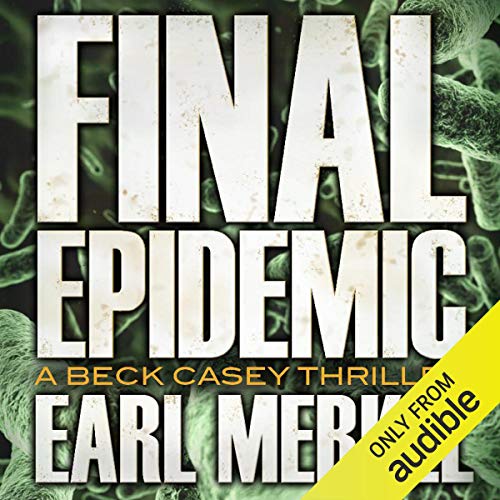 By: Earl Merkel
Narrated by: Christian Rummel
Try for £0.00

This is how the world ends....

An invisible killer has returned. The last time it raged, upward of 40 million died - in a matter of months. Now it is back, released to prey on an unsuspecting, unprotected world.

Beck Casey, an expert on biological warfare, is called back to his former CIA post to unravel the twisted case... and to discover if a vaccine exists. But Casey's potential allies to save the future are the worst enemies from his past. The Final Epidemic has begun.

What listeners say about Final Epidemic

If you could sum up Final Epidemic in three words, what would they be?

Yes. The cause of the epidemic seemed easy to figure out but who released it was a complete surprise. With all of the twists, you never knew who was going to die next and in a thriller this is always a plus.

When they find Beck's daughter and friend and are able to save them.

This is not a new storyline but it is well written and has intriguing characters. I bought the Kindle book and got the audio book for $1.99. That is a great way to hear a new series by an author I had not read before. Beck Casey caught my attention and I am starting the next book. Narrator was good too.

Emotional... Intense... A Must Listen!

I chose this book because I am interested in the subject matter. the story is not original, but the book is superbly plotted, appropriately paced and Rummel's narration brings the characters and situations to life. I had never read the author, or listened to the narrator before, but I have become a fan of both.

Anyone looking for a captivating storyline that delivers chapter by chapter, needs to give this a listen.

What disappointed you about Final Epidemic?

Just horribly boring! I could not even stay interested long enough to get to the main story! I have never felt that way about a book!

What was most disappointing about Earl Merkel’s story?

The unnecessary background and chit chat that had nothing to do with the story so boring it put me to sleep!

I did not like his personality or the way he portrayed the characters. Maybe it was just the book or writing itself.

If you could play editor, what scene or scenes would you have cut from Final Epidemic?

Just all the unnecessary endless descriptions of the characters thoughts that had nothing to do with the story so I could not finish the book.

Total waste of a credit and my money!