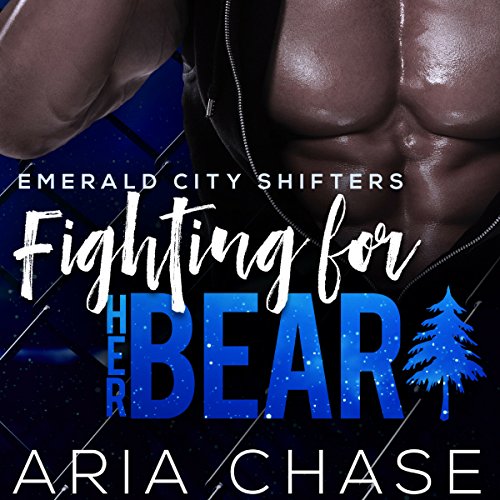 Fighting for Her Bear

Fighting for Her Bear

When Maya investigates a tip about illegal bear fights on a private island, she doesn't expect to discover the bears are actually bear-shifters being exploited for their genetic abilities and as entertainment to build a criminal's gambling empire. Before she can do anything with the information, she's captured and detained. As a veterinarian-in-training, she persuades them to let her care for the fighters instead of killing her. She immediately connects with one of the shifters, slowly winning Hale's trust. Hale and Maya face a tough fight as they battle to regain their freedom and bring down the whole operation. It's an even tougher fight for him to move on from what he's been forced to do as a captive, and she has to fight his misguided good intentions to keep him from pushing her away when he needs her most.

Didn't have to read the previous books

I was generously gifted this audiobook for an honest review. I had not listened to any other Emergald City Shifter books and I didn't need to. However, I enjoyed this one so much, I will look to buy the others. I thought this book had a solid story with loads of excitement, thrill and suspense. Kit did a great job of bringing in the reader/listener and keeping them glued to the pages until the book ended. It was a complete story from beginning to end. The characters in the book were described so well you could actually see them in your mind's eye. Meghan Kelly did a great job of distinguishing each of the characters, there was no problem knowing which character was talking. I really enjoyed Maya's and Hale's story. Looking forward to more.

This book makes me wish I had all the prior ones. I absolutely love shape shifters of all kind. The story was believable and the characters were fantastic.
Drugging bear/shifters in the name of science what a crock. But he paid in the end. Glad rampage/hail had a consequence. And he's gonna be a daddy. Opening for the next book.
I receive this free for an honest review.

Good story and characters.
Even though this is book 5, it can be read as a stand alone.

When Maya decides to investigate a tip about illegal bear fighting, she gets way more than she bargained for. Now she has to find a way to save herself as well as Hale and the other bear shifters. Yes there is a HEA, but the epilogue stopped to soon.

Meghan Kelly did a good job with the narration.

This Audiobook was provided by the author, narrator or publisher at no cost in exchange for an unbiased review courtesy of AudiobookBoom

It was an interesting listen. There is suspense, drama, and romance. Totally unique story with a great plot and conclusion.

The story was complete with no cliffhangers. I have not read any of the other books in this unique series but I'm looking forward to listening to another one.

The narrator did a good job bringing the story to life. The story is mostly told in Maya's POV. You get some of Hale's perspective as well towards the end. It's a HEA conclusion.

I throughly enjoyed listening to it. It's only about 3 and 1/2 hrs long so I was able to listen to it in one day.

this was given to me for an honest review

loved the book, and it's narration. It's a very well written book, kept me interested throughout. I would recommend this book to anyone who wants to listen. even though not my usual genre I very much enjoyed it.

So at first I was in sure if I liked the story only because in the beginning it made me cry off the bat listening to the Bears fighting. But once I got into the storyline understand what MiaI was trying to do with saving the Bears and how they develop the character I really did enjoy the whole theme of how she brought things together. The narration style was a little different than what I had anticipated but it was refreshing to know that the vocabulary used in the story was very very very well thought out. What I listen to the other books sure absolutely this book was gifted to be for my honest review

If You Must Fight It Must Be for Your Mate

Would you listen to Fighting for Her Bear again? Why?

I probably would listen to it again once the narrator figured out all of the flaws in narration. the book was a different take on the shifter stories. I liked how the hero is slightly flawed but gains enough strength when he realizes that his mate is in danger.
I am glad that the mad scientist was destroyed. I hate it when they are allowed to gett away with anything and claim that it is all in the name of science.

That the hero was willing to listen to what his mate had to say and not go all alpha my way or the highway. They would have lost each other if he had chosen that path.

Have you listened to any of Meghan Kelly’s other performances before? How does this one compare?

I listened to Missy Goes To West Point and she did a much better job in narration on that one.

I recieved this book in exchange for an honest review via

Oh I really want a BEAR, a Sexy one!1

I was given this book in return for honest unbiased opinion. I liked this book a lot. Meghan Kelly is an awesome Narrator and I enjoyed what she did with this very well written story. Overall I really enjoyed this Shifter Romance, oh and it is great that I could enjoy Book 5 and not feel totally lost listening to the story.