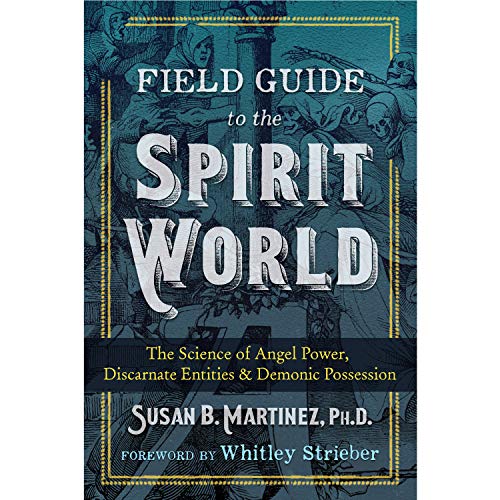 Field Guide to the Spirit World

Field Guide to the Spirit World

A comprehensive examination of the many ways the spirit world affects the material plane and our minds. It:

We are spirits housed in a body, and just as houses can be haunted, so can people. When the living succumb to dissociative states of consciousness, they become a magnet for lost but clinging spirits. Known as jinn, dybbuk, daemon, wuqabi, or simply the undead, they hover unseen on the earth plane, ready to inhabit the most suitable body available.

Documenting the life of wandering spirits and their impact on vulnerable human targets, Susan Martinez offers a radical departure from the standard psychological explanations for a host of pathological behaviors - including multiple personality, autism, epilepsy, migraines, obsessive compulsive disorder, depression, schizophrenia, anxiety, PTSD, self-destructive urges, and strange outbursts - and reveals that hallucinations are often true impressions of spirit input. Martinez explains how mental health comes down to the delicate balance between self-control and spirit control. When trauma triggers an escape response, the soul takes flight, leaving the mind susceptible to possession by discarnate entities. However, the spirit world can also bestow gifts upon those whose psyches are open, such as in the case of mediums, shamans, people who communicate with angels, and many of the world’s creative geniuses.

Martinez presents “overshadowing” by spirits as a universal, cross-cultural phenomenon, documenting modern and traditional accounts as well as corroborating indigenous beliefs. She examines soul decay, soul travel both before and after death, and how knowledge of the spirit world can offer positive treatments for disorders like schizophrenia and autism. Providing a detailed guide to the spirit world and its inhabitants, the author offers checklists of symptoms of “overshadowing”, methods from the world’s top exorcists, and instructions on how to free spirits so they can continue their journey into the beyond - all the tools necessary to forearm us against soul snatchers and other enemies of the light.

I lost track at 500 Quote unquotes…. It was hard to follow the narration because there were so blasted many quote unquotes that it was distracting. Do you really need to use verbal quotation marks when it is obvious you are quoting someone?

The narration was spoiled by repetitions of quote/unquote, reflecting the author’s liberal use of quoting others a habit of putting her own words in quotes. The author also abbreviates many phrases which is just annoying, for example, SciMat for scientific materialism. This is no field guide. It’s an angry rant, read by the narrator (correctly but still unpleasant) to express that anger, full of disdainful fuming about words like “disorder” and “energy.” Whatever ails you - from PTSD to serial murder - blame a spirit.