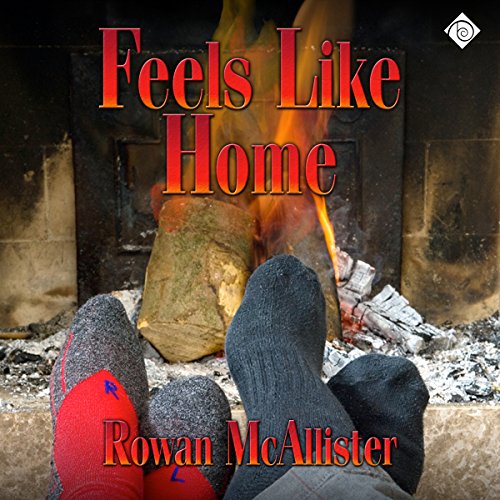 It's only three days 'til Christmas. Jeremy Porter is still grieving over his mother's death, and Paul McClellan is a lonely divorcee just trying to make it home even though the only one waiting for him is his cat. It may seem like a miserable combination, but when Jeremy saves Paul from being hit by a car during a nasty snowstorm, their connection and chemistry are undeniable. It's easy to cuddle up with a stranger when you're snowed in but can a holiday affair turn into more if being together feels like home?

Jeremy is sad this Christmas because it’s his first without his mother, who was a friend too. He ends up helping Paul by saving him from being run over, then gives him shelter during the storm. They end up celebrating a “pre-Christmas” and making good use of the time by learning about each other both emotionally and physically.
They discover they have a pretty intense connection and when the snow clears they decide to make a go of a relationship, even though it might take some extra work.
**
I enjoyed the emotion and the chemistry in this story and felt that, by the end, the couple had a good chance of making it go. Since it is a short-story, we didn’t get a lot of time to get to know them, but what we did see looks promising.
Michael Stellman did a nice job with the narration, letting the story tell itself with a style that is easy to listen to.

Short, sweet story for the season

What did you love best about Feels Like Home?

Have you listened to any of Michael Stellman’s other performances before? How does this one compare?

This was my first, but I'd listen to him again

Yes, and I did

Jeremy Porter is on his way home just a few days before Christmas when a sexy stranger catches his eye. Paul McClellan is stranded with a flat tire just outside Jeremy’s apartment when a would be hit and run driver comes dangerously close to ruining Paul’s Christmas. After pulling Paul to safety, Jeremy invites him up to his apartment to warm up and wait out the snow before they can safely change the tire.

There is a connection between them that cannot be denied and almost as soon as they are inside and in wrapped up in warm clothes, they are out of them and wrapped up in each other. They spend the next two days wrapped in a world wind romance getting to know more about each other. They are both single but Jeremy is still mourning the loss of his mother and his ex-boyfriend while Paul has been divorced for close to six years, but his ex-wife can still make him feel like a petulant child.

Jeremy is amazed at how quickly he acclimates to having Paul around, thinking being with Paul feels like home, feels natural. And yet, he won’t tell Paul, or ask him to stay. When the storm clears and they replace Paul’s tire, will he go? Or will he stay and make a home with Jeremy.

This was a cute story about finding the one in the oddest of ways. My only complaint would be I wanted the author to decide between adult and YA. Words used were definitely descriptive, but then it was more of a fade to black than actual details of what these guys were doing. I would have rather had one, or the other, instead of teetering between the two. My first audible with Michael Stellman and I’d listen to him again, he held his own with voice changes and had the ability to carry the story with his voice.

If you are looking for something short and festive for the season, give this one a go.

This is a sweet little story. I think it has a great narrator, and the story set up was great. I think it's a great romantic story, especially for those of us who are hoping to stumble across that true love.