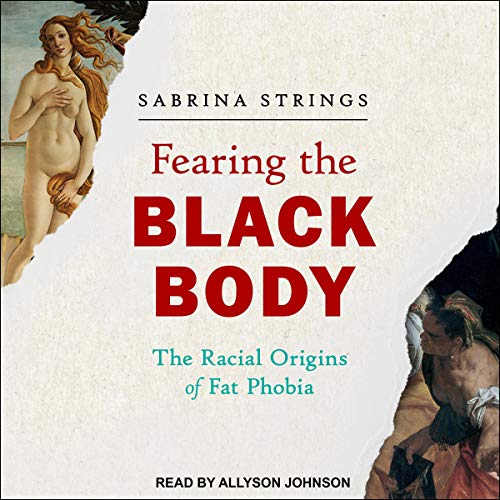 By: Sabrina Strings
Narrated by: Allyson Johnson
Try for £0.00

There is an obesity epidemic in this country, and poor Black women are particularly stigmatized as "diseased" and a burden on the public health-care system. This is only the most recent incarnation of the fear of fat Black women, which Sabrina Strings shows took root more than 200 years ago.

Strings weaves together an eye-opening historical narrative ranging from the Renaissance to the current moment, analyzing important works of art, newspaper and magazine articles, and scientific literature and medical journals - where fat bodies were once praised - showing that fat phobia, as it relates to Black women, did not originate with medical findings, but with the Enlightenment era belief that fatness was evidence of "savagery" and racial inferiority.

The author argues that the contemporary ideal of slenderness is, at its very core, racialized and racist. Indeed, it was not until the early 20th century, when racialized attitudes against fatness were already entrenched in the culture, that the medical establishment began its crusade against obesity. An important and original work, Fearing the Black Body argues convincingly that fat phobia isn't about health at all, but rather a means of using the body to validate race, class, and gender prejudice.

What listeners say about Fearing the Black Body

Unpacking the weight of white fear & self hatred

An incredible, well written and thoughtful book, only issue was the narration is not good! Its very unemotional and robotic, like A.I. The content its self is great so perhaps got for an old fashioned book

Amazing, very much needed read for every human being specially women. Very clear, and inspiring message

Highly recommend. Everyone acts like fat is the enemy...now I understand the genesis of the phobia. Great in pulling it all together.

Please re-record with the author

My only regret is that the author isn’t reading this. I want her voice reading this important work.

A must-read for anyone in medicine or public health

I bought this book as part of researching an academic article and found it so rich and compelling that I had to completely rewrite my chapter around Strings’ work. As a specialist in health equity, this book is timely, well researched, and surprising even for people already knowledgeable about the role of antiblackness in medicine. An absolutely crucial challenge to the diet industry and continuing medical racism.

Not only is this educational for the purpose of understanding the origins of fatphobia I believe this does an incredible job of explaining how racial bias is at the root cause of most health/weight criticisms/even moral stigma behind being larger bodied people.

Subject was interesting but I couldn’t listen long at one time because it was delivered in a monotone.

This is definitely a more academic read. Includes historical and critical analysis of the use of fat phobia, racism, and social norms to control women’s bodies. Well worth the read!

I’ve been on a journey to understand fat phobia and become educated about weight politics. This book truly is the must read for understanding the intersectionality of this topic.