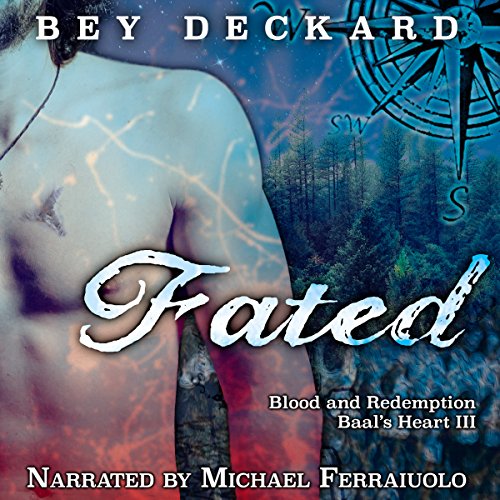 With the captain's mind in shambles, Jon and Tom set out to find the passage home through the black mountain range, hoping to find a cure for Baltsaros's madness. However, when the men are forced to part ways, darkness takes root in the schism created; fate, lust, and vengeance become obsessions threatening to tear apart the fragile bonds holding the three together.

Following on the heels of Sacrificed, Fated takes the pirates on a quest to find those responsible for the captain's bloody beginnings. But can they survive what awaits them where past and present meet?

Oh heck yeah! Fated: Blood and Redemption is everything I was hoping for and more in the final installment of the Baal’s Heart series. Thank you Bey Deckard, for the hottest, dirtiest pirates, for the intrigue and deception, the swashbuckling adventure, and all the love and hot kinky stuff, as only you can write it!.

The climactic conclusion to the Baal’s Heart trilogy is a twisted, turning ride.

As with all of Deckard’s stories I am never sure which way things will go, and this one did not disappoint.

Fated: Blood and Redemption, the third book in the Baal’s Heart series by Bey Deckard, continues the journey and brings some closure to issues facing the triad of Jon, Tom, and Captain Baltsaros. Aspects of the men’s personalities are examined in greater detail and this book brings to light a few new facets of each character’s psyche, which are extremely intriguing.

Fated is a must read for fans of this series and I promise it is a heart stopping thrill from cover to cover!

If you haven’t yet ventured into this series you are going to want to catch it from the beginning in order to appreciate the true world of Baal’s Heart.

A longtime fan of Michael Ferraiuolo, I was dying to hear what he could do with a story by Bey Deckard. In the end I waited to read Fated till it was released on audio and I’m incredibly thankful I was able to experience it through the magic of Michael Ferraiuolo’s lyrical, expressive voice.

Ferraiuolo has completely gotten into the heads and hearts of these guys:

He nails Jon’s softness, his subtle domination, and his growing maturity. Tom’s gruff but incredibly tender actions and his irrepressible need to give and receive love, come across loud and clear. And the way Ferraiuolo imbues Baltsaros’ voice with growing terror as he grapples with the variety of ways his mind deceives him actually gave me chills.

An intriguing character from the start, Baltsaros’ actions run the gamut possible of the human psyche.

The amazing life this man has led, what propels him to act and react, and how he interacts with others - well let me just say that Bey Deckard does these completely dark, messed up characters better than any author I’ve ever read. He clearly had a blast with this one!

Jon has grown tremendously through this series. Filling in as captain for the Heart, Jon has come a long way from the timid stable boy Baltsaros sought out and kidnapped at the start of Caged. Plagued by visions, dreams, and images planted by a fortune telling old hag, poor Jon is overwhelmed and preoccupied and finds the Captain’s boots are hard ones to fill indeed.

I’ve had a mad crush on Tom since the start of this series, and I was thrilled with how much of Fated really is Tom’s book. We get the story of how Baltsaros comes to seek Tom out, information about his initial abduction, and details of his enslavement. There is the start to finding some closure with Abetha. And best of all, inspired by his lust and the desire to throw a wrench into his mother’s marriage, the flashback to the story of how Tom seduces Baltsaros! Blimey, that is a scene I’ll never forget. Tom’s inner confidence is so charming, and the growing realization of his needs and the depths of his desires - what a thrill to see him work through it all. Best of all, the flashback to the first time Baltsaros binds him and he willingly submits…hell he begs for it. Hottest scene in the book.

Between all the flashback scenes and the opportunities the guys have to be just couples, Baal’s Heart III really explores the intimacies and contrasts between the relationships.

There is so much beauty in this book, and the desperate love the men have for each other is reiterated throughout the story.

While Mr. Deckard has stated Fated: Blood and Redemption is the final installment of the trilogy, the ending he thoughtfully provides allows the possibility of many more stories in the future (hint, hint). Thankfully book 3.5 awaits and, lucky me, it is also narrated by Michael Ferraiuolo.

Standout conclusion to an amazing trilogy

What made the experience of listening to Fated: Blood and Redemption the most enjoyable?

Michael Ferraiuolo elevates already extraordinary writing/story to another level with a spot on performance and insightful characterizations.

Jon continues as my favorite character as he is the one faced with life-altering challenges to his moral code and who he is as a person.

Everything. Each character was unique, his portrayals were honest and sensitive, building tension and angst that kept me riveted and engaged.

There were moments for both: tears, laughter, fear, disgust, dismay...

I am so happy to be back with three of my favorite guys! Fated: Blood & Redemption, by Bey Deckard, is book three in his Baal’s Heart trilogy. These little gems are best read in order and I assure you if you do you will not be disappointed.
As I’ve mentioned in my previous reviews of Caged: Love and Treachery on the High Seas and Sacrificed: Heart Beyond the Spires, the first two books in the series, these stories are simply brilliant and author Bey Deckard does it yet again. He manages to hold you hostage with his words and the widely talented Michael Ferraiuolo expertly translates that brilliance with his voice.

Fated: Blood & Redemption begins with a memory from young Tom’s days as a slave. He has killed yet another master and he’s been sorely punished for it. If you have read the first two books I dare you to say a bad word about my “Tomcat”. Tom is such a resilient young man and has overcome so many hardships. I have thoroughly enjoyed his evolution throughout this series. He’s become someone the Captain and Jon can count on and has truly matured.

Tom will always remain my favorite character in this series. He is rough and gruff and he’s got that cocksure attitude that makes you either want to smack him or kiss him. Tom has really come a long way in terms of the way he thinks and acts. His relationship with Jon has flourished and he now can readily say the words “‘I love you’”. He is also fiercely protective of the Captain, whom he calls “‘Da’”. He is Baltsaros’ champion even when he’s mad at him. I love Tom’s loyalty. It wasn’t always easy for Tom to submit and the many flashbacks and scenes in Fated really drive home how deeply scarred Tom was while under the hand of slavery. Rest assured this is not a case of ‘magic penis’ and the reader/listener really sees the progression of Tom and the Captain’s relationship.

Jon has grown as well throughout the series, maturing and coming into his own. He’s still the same Jon in that he over thinks and analyzes things, qualities Tom just chuckles about, and he still has powerful dreams of trying to piece together a fortune he was told of by an old lady.

Captain Baltsaros is slowly trying to piece his mind back together and throughout the tale we see flashbacks from his point of view. The memories provide the audience with a view into his mind and possible origins of his bloodlust. He recounts a story from his childhood that left me breathless.

One of the things I enjoy most about the Baal’s Heart series is the evolution of all the men within the triad and outside of it. Each man truly compliments the other and it is a thing of beauty to see how they all come together. Although that’s not to say the men have an easy time of it but Bey Deckard expertly navigates all of their strengths and weaknesses.

The inner workings of their triad has come under some strain: There are misunderstandings and hurt feelings but underneath it all there is the love that each man feels for the other.

In this third book we see young Jon take the role as Captain of Baal’s Heart. Captain Baltsaros is still recovering from the various tortures at the hand of the evil Emperor in book two. His mind is still in shambles and he alternates between quiet and madness. Their plan is to head home to Madierus and have Abetha help “cure” their Captain.

Unfortunately the return home for the men isn’t the smoothest of sailings and problems and situations arise. Jon is stressed with the role of Captain on his head and Tom is right by his side to help while Baltsaros is “safely” ensconced in the cage in their bedroom. The Captain’s mental state is a cause for concern for both Tom and Jon and they deal with the stress in different ways.

Fated focuses on the here and now but we also get glimpses into the Captain’s past as well as Tom’s and even young Jon. We see how Baltsaros and Tom first met and we get to see how their relationship came to be.

What I love about Bey Deckard’s writing is that he firmly places the reader/listener right in the thick of the action, and of course the more quiet times as well. Throughout the narration I felt as if I were a passenger into all of their inner thoughts and dreams.

Michael Ferraiuolo is just simply amazing. I know I’ve said it before but I’ll say it again, with just his voice he truly brings this story to life. He breathes life into each character and simply nails all of the accents and tones. I think the most important thing in being a narrator is emotion and Michael Ferraiuolo’s voice is magic as he portrays the emotions of each character magnificently.

As usual the supporting characters are amazing and Mr. Ferraiuolo does each one so brilliantly. Again Michael is each character but truly shines with the way he tells the story. Mr.Deckard writes an amazing tale and Michael is along for the ride brilliantly bringing these men and their tale to life.

In the famous words of Oliver Twist, “‘Please Sir, I want some more!’”, this is how I feel about a Bey Deckard story. And if Michael Ferraiuolo is narrating, sign me up!! Fated: Blood & Redemption definitely ends on a HFN and I just know there’s much more to this tale. In fact, I believe the ex-slave from the Emperor’s palace, Saban, has a story to tell, especially because of his ‘friendship’ with Tom. Hint, hint!