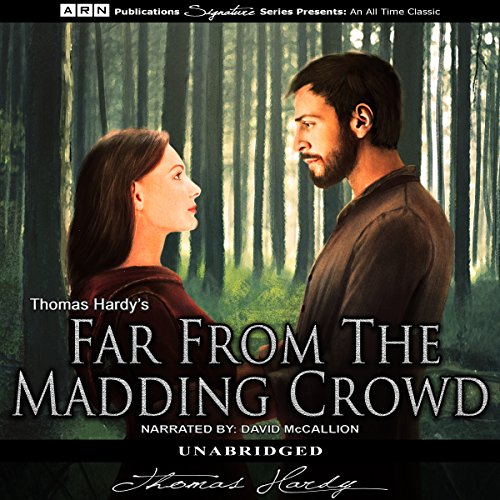 Far from the Madding Crowd

Far from the Madding Crowd

Thomas Hardy's novel Far from the Madding Crowd, which first appeared in Cornhill Magazine in monthly installments back in the late 19th century, features the love life of the young Bathsheba Everdene who is as poor as she is beautiful. Fortunately, Bathsheba's uncle leaves her his farm, which she goes to manage in the small town of Weatherbury. Before she leaves, however, she has an interesting encounter with a young farmer, Gabriel Oak, for whom she does a tremendous favor, and he becomes indebted to her, not to mention enamored. Bathsheba resists his advances, but the two cross paths again when he comes to her farm seeking work, and she hires him as the shepherd on her newly acquired farm.

Though Gabriel is still in love with her, Bathsheba successfully seduces her neighbor, Mr. Boldwood, and knows just how to play with his emotions to keep him hanging onto her every word. After denying him once, she tells him that she'll consider his offer to be with him. Yet shortly after, she meets Sergeant Troy, who also becomes enamored with her. With blatant disregard for Mr. Boldwood, Bathsheba makes another series of decisions that unfortunately don't bring her luck or happiness, as she learns of a harrowing detail about her fiancé right before he mysteriously disappears. In the end, Bathsheba learns to be complacent and patient, and eventually acquires exactly what she always needed.

Far from the Madding Crowd is among the best fiction ever written in my opinion. I loved the detailed descriptions and the symbolism. The story was mesmerizing, simply. This Audio book more than replaces the film! It surpasses it.

The narrator was awful!

I gave this book 3 stars, but give this narrator 1 star! His character voices were awful and his voice inflection was completely wrong! I had to give up and just totally read the book on my kindle app. This was a total waste of money/credit!