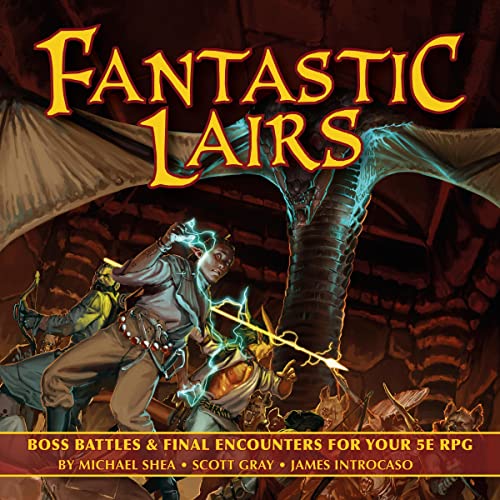 The best 5e fantasy roleplaying games are often the most unpredictable. When the plans of the Gamemaster meet the actions of the characters, the incredible creative energy that results can spin encounters off in different directions, creating a largely spontaneous campaign story that keeps the GM and the players alike on the edge of their seats.

But when it comes to the climactic boss battle encounters that cap off single adventures or entire campaigns, it's often much harder for GMs to work things out on the fly. That's where this audiobook comes in. Scott Gray, James Introcaso, and Mike Shea have teamed up to lighten the load of shaping and developing your game's climactic encounters.

Fantastic Lairs is an audiobook of capstone lair encounters for your 5e fantasy RPG, created to inspire and fit into your own campaign. Each fantastic lair includes a well-designed and play-tested boss encounter for characters of various levels.

Thanks to the 3,895 backers on Kickstarter, the book will include 23 lairs for all tiers of play. Check out the free sample, which includes two fantastic lairs you can use right now!

Fantastic Lairs is the joint brainchild of all three members of the design team, each of who brings a wealth of creative skill and experience to the project. From over 50 initial concepts, the team narrowed down a selection of 20 ultimate boss lairs for development in this book.

Narrated by Rudy Basso, this audiobook gives you the opportunity to enjoy these adventures through the comfort of your own ears.

What listeners say about Fantastic Lairs