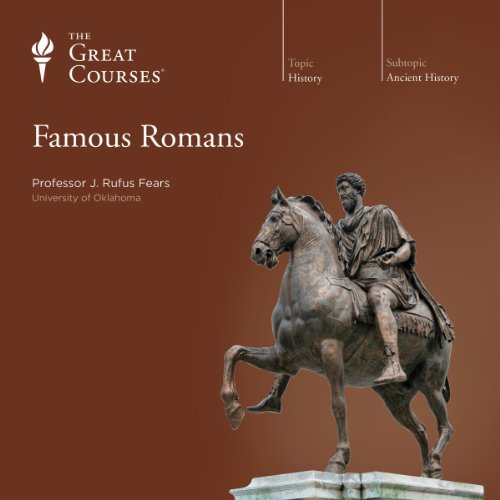 These 24 lectures retell the lives of the remarkable individuals - the statesmen, thinkers, warriors, and writers - who shaped the history of the Roman Empire and, by extension, our own history and culture.

Among the fascinating gallery of individuals whose lives, ideas, actions, and legacies you'll explore are Hannibal (who caused the Second Punic War personally, much as Adolf Hitler caused World War II), Augustus (who, beginning at the age of just 19, brilliantly followed a doctrine of ruthless expediency in order to rescue Rome from a century of civil war), and Marcus Aurelius (that most noble and philosophic of rulers who may have hastened the Empire's decline by tolerating the wicked cruelty of his heir).

Professor Fears divides his presentation into three "turning point" epochs in Roman history: Rome's war with Hannibal (the Second Punic War); Caesar and the end of the Roman Republic; and the imperial era between Augustus and Marcus Aurelius.

As he presents the great figures of each period, he makes them seem personal and immediate. As you study these and many other significant Romans, you'll probe fundamental questions about the political and cultural history of Rome. What was the impact of Greek civilization on the Romans? Why did the Roman people, at the height of military, political, and economic power, abandon their republican liberty for the dictatorship of Caesar and his successors? What made the 2nd century A.D. one the most creative periods in world history? And why did the central figures of Roman history hold so much appeal for America's Founding Fathers?

What listeners say about Famous Romans

Dumbed down and superficial

This series claims to be university level, but if it is then all I can say is that standards at university have really fallen.

Admittedly I didn't get beyond the first two lectures, but as they both consisted of imaginary conversations between the subject of the lecture and his father, as well as irritating parallels with the the USA (the Ancient Romans got rid of their Kings, just as in the United States we got rid of King George....) it was just too dumbed down for me. A teenager with an interest in history, or someone who likes their learning superficial, may enjoy this - I did not.

A waste of money, and if I could give it no stars I would.

it is good. but it does not focus enough on the characters of each lecture. it follows the largely narrative route taken by most courses on roman history. for example only the last 10 or so minutes of claudius is on him. the first part focuses on the narrative from augustus through tiberius to caligula.

couldn't finish. annoying narrator AF. overly focus on american comparisons. i give up. try the robert garland lectures, they are good

After listening to some of the brilliant Great Courses, this has been a massive let down. The lives are recounted as stories with simplifications and generalisations which are misleading and lacking in any analysis or insight, and spurious opinions are dangerously offered as fact: the heroes of the Trojan War were historical figures, the Spartans were the most famous of Greeks, all city states aimed to be democracies, Schliemann found Agamemnon.... For high quality and balanced lectures, go for Elizabeth Vandiver, Jeremy McInerney and Robert Garland.

Accent was a wee bit hard to take.

Accent was a wee bit hard to take with the inflections. I thought his religion led to misrepresentation of stoicism. For example Epictetus and Marcus Aurelius were more open to Democritus' "Atoms & Void" metaphysics. He was determined to represent them as monotheistic rather than pantheistic. Logos could be nature, not an anthropomorphic deity. .

The content was good and relevant, with clear parrallels being drawn between the time periods and contemporary events. The connections shown between America and the Roman Republic, which has had such a strong influence on Western civilisation, especially USA is far from being pointless.

I often have issues with the pronunciation of American speakers, sometimes it's the accent and sometimes it's just the diction, however that hasn't affected my understanding of the lecture, so it's not something to fuss over.

At points, there was some waffling and you seem to lose what the lecturer is talking about.

I would like to point out that lectures hold only a starting point for people to do their own independent study. Lecturers are not meant to feed you everything like teachers in promary and secondary edication. They are meant to give you a foundation on which to build your own knowledge base. Considering this, these lectures have achieved their purpose.

One of the all-time greats

As a junior in college, I enrolled in Freedom in Rome taught by Dr. Fears at The University of Oklahoma. These stories, and Fears skill and passion as a lecturer, have stayed with me for many years. I’m thrilled to find this series on Audible, and I highly recommend these.

Twenty years later, I just visited Rome for the first time, and these stories stayed with me. I’m so grateful for the memories.

Professor Fears is a joy, listening to him is fun.

Would you listen to Famous Romans again? Why?

Yes, the information is easy to follow, and fun to hear

What other book might you compare Famous Romans to and why?

And book by W.E.B Griffin.

What does Professor J. Rufus Fears bring to the story that you wouldn’t experience if you just read the book?

His voice, it makes one think a friend of Caesar is telling the story.

I'm going to buy more from him

Hands down one of the most thrilling historical courses I've ever listened to. The description of the Second Punic War makes me wonder why Hollywood hasn't tackled it yet. The war with Hannibal shows just how close Rome came to being eradicated. Had Hannibal fully pressed his advantages Rome may have been a historical footnote and we'd all be speaking a Phoenician derivative.

The sections on Julius Caesar were also extremely well done. The course ends with the philosopher King, Marcus Aurelius, the last of the "Five Good Emperors". His decision regarding succession is given a strong rebuke by Professor Fears.

The first lecture is done in a style a little different from the rest, so let the course build up. Once Hannibal starts crossing those Alps, you'll be hooked!

A great introduction for the novice

What did you love best about Famous Romans?

The author's enthusiasm and approach to his subject.

What was one of the most memorable moments of Famous Romans?

I couldn't specify one moment.

What about Professor J. Rufus Fears’s performance did you like?

His enthusiasm for his subject.

The greatness of Rome...

I thought the author did a good job making his subject enjoyable and approachable. Some of his lectures might be too simple for people who have already studied Roman history though.

This course would make a great primer for The History of Rome by Fagan course that is also available on Audible.

Outstanding portraits of the Great Romans

What made the experience of listening to Famous Romans the most enjoyable?

The narrator (a college lecturer, actually) approaches his subject with infectious enthusiasm and an excellent grasp on the dramatic details of the lives, triumphs and and machinations of these great men. The anecdotes are excellent and well chosen, and they never stray away from the central thread- that these were the people who moved the world by their will.

What was one of the most memorable moments of Famous Romans?

The story of the Gracchi - Tiberius and Gaius Gracchus- the lecturer imbues his subjects with life, and you get to feeling the peril that they are willing to endure in order to save and shape Rome. And Hannibal- that was one of my favorite lectures. Hannibal and his foil, Scipio Africanus, was a wonderfully well-done piece. I could feel Hannibal's bone-deep hate of Rome and Scipio's implacable decision to stamp him out utterly.

Which character – as performed by Professor J. Rufus Fears – was your favorite?

Can I say all of them? His channeling of Cicero is pretty fabulous. The section on Scipio (the first) is wonderful, too.

I thoroughly enjoyed this course. I learned a lot, and intend to pursue Roman history more completely via these Great Courses and other work (as they weren't entirely covered in my education).

listened to this one 3 times now and better every time. My favorite professor in the great courses series.

This is how history should be taught

Wonderful lecturer and great storytelling. I loved how he showed the parallels between the Roman empire and our current political and social behaviors. In the beginning of each lecture he took few minutes to recap the previous lecture which is helpful if you don't listen on daily basis.

Dr. Fears is the best!

Nobody teaches and entertains like Dr. Rufus Fears. His enthusiasm for his subject and for history are refreshing.

if you love ancient history, and inspiring Tales

... from ancient history, you'll love this audio
recording. the author definitely has a classical view of individuals in history. Having said that, I think that everyone can find something inspirational about hearing how people took on the world either well or poorly, and left a mark on history.

I'm not saying it's the best, but it's my favorite. I've read Roman history books with lots of facts, and also stories about famous Romans which are attractive but losing perspective. Professor Fears did a wonderful job giving dramatic stories, providing adequate backgrounds and perspective, and finally, explained why they are wonderful from the perspective of their own characters. I like what he said: the purpose to read history and biography is to make us better human beings.