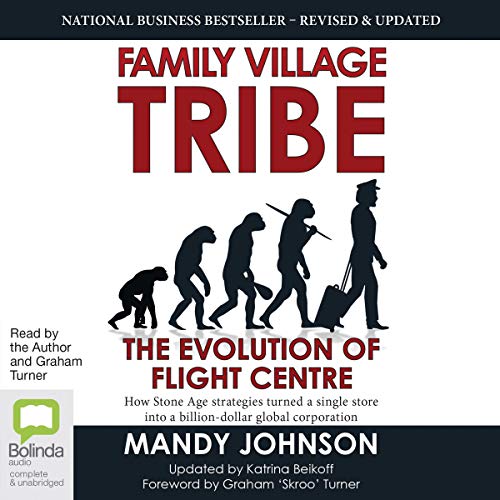 How Stone Age strategies turned a single store into a billion-dollar global corporation.

Flight Centre Limited is an anomaly in the business world - a modern-day organisation that uses Stone Age strategies to achieve phenomenal success.

‘I didn’t realise my life had been hijacked until a year after it happened.’

That’s Mandy Johnson’s take on her introduction into the world of Flight Centre Limited - the travel company that divides its workforce into prehistoric ‘families’, ‘villages’ and ‘tribes’, and rewards them with autonomy and incentives.

From its origins in 1973 as a UK tour company with a single bus called ‘Bollocks’, FCL revolutionised the travel industry and morphed into a global giant. It faced challenges including the War on Terror and SARS that wreaked havoc on business. It battled the encroachment of the internet, a disastrous internal restructure and a US acquisition that delivered a profit wipe-out just months before the global financial crisis. And yet each time FCL has come back stronger than before, almost doubling in size every five years, relying on its Stone Age tribal structure as its platform for success.

Its founders were two 23-year-old veterinarians from Queensland, Australia. Neither had any business experience, and the idea for the company was hatched while celebrating in a Munich beer hall....

So how did they make it work? Mandy Johnson and Katrina Beikoff have enjoyed full access to all the major players in FCL to bring us the full story.