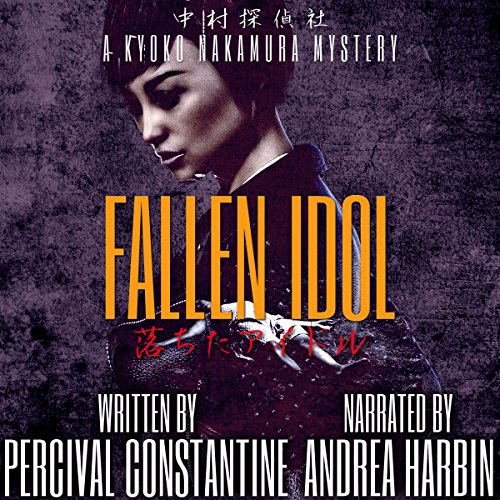 Sometimes suicide is just a facade.

When a disgraced former pop star plummets to her death from her Osaka apartment, all signs paint a picture of a troubled young woman who took her own life. But once her parents hire Kyoko Nakamura to learn the truth, the private detective discovers not everything is as it seems.

Kyoko's investigation will lead her into a world of drugs and prostitution, face to face with dangerous criminals, and through the seedy underbelly of Japan's music industry. With all odds against her, can Kyoko redeem herself for a past failure by finding justice for a fallen idol?

From Percival Constantine comes a thrilling new mystery series, set in one of the world's most intriguing locales!

What listeners say about Fallen Idol

Fallen Idol was a crime mystery set in Japan, and I was hoping for a bit more of a feel for Japanese life. There was a fair bit of bowing and reference to items like tatami mats, but otherwise it could have happened pretty much anywhere. The low-life and hostess bars were certainly not unique.

I was offered this as an audiobook for review from Audiobook Boom and I enjoyed the narration by Andrea Harbin, though it could have been a little faster.
I struggled with the Japanese names at first and I have to admit that they are going to make this review difficult as I have no idea how to spell them.

Arkanay Suzuki is a former pop idol who falls from her balcony in the first scene. The police label her death as suicide and prepare to close the case, but Kyoko Nakamura is approached by Arkanay's parents to look into the circumstances of their daughter's death. Kyoko was a police officer until she left the force in disgrace and she is now running a detective agency with her two colleagues.
Together they follow clues, chase suspects and generally put themselves in danger, to solve the mystery of Arkanay's death.

The ending was disappointing and I think I was all set to give 4 stars until the last few minutes; the mystery is solved but is justice served?
3 1/2 stars.

Fallen Idol's can rise like a Phoenix ,will ours?

The narration is perfect for the series. Harbin nails the personas and also does a good job with voicing the females. Harbin and Constantine are total pros who handle all their characters beautifully as well. I NEED to know what's next for a couple of the characters and where the band goes from here. Can't wait for the next one. eek.This unusually constructed book allows for fantastic twists, but like an elegantly drawn sketch, the full picture slowly emerges. We follow the happenings at an almost real time speed which propels the story forward in a very tactile​ way..I will say again something worth mentioning,
Andrea Harbin, as narrator, is superb. The text is read briskly, but not too fast, is clear and her use of intonation helps define the emotion.. Each of the characters, too, has a clearly distinctive voice, lending to each a further reality of their personalities. An excellent performance, and, overall, a great listen with a perfect symbiosis of author and reader. A great peek into the troubled minds of an equally troubled generation, trying to find a future where little is there to give hope, all presented in an unusual thriller. It really does give hope that, whilst things are very likely to go wrong, sometimes they might just come out right instead. Recommended to anyone enjoying detailed character representation and a thriller that is just that little bit different.I was voluntarily provided this free review copy audiobook by the author, narrator, or publisher.I received this title for free in exchange for an unbiased review.As always this is my honest opinion.

Fallen Idol is a story about a Japanese pop idol Akane Suzuki, who has been found dead after falling off her balcony. A private investigator, whom is a former police detective, is asked to look into the case by the idols parents. The Police have ruled the death a suicide, but the parents don’t believe this is the case.
In investigating the case Kyoko Nakamura learns that Akane has fallen into disgrace and fired from her popstar group. While trying to make ends meet,Akanee turns to a world of sex for money to pay her rent and drugs and alcohol just to make it through the day.
The story is about friendship, loyalty, and jealousy. I really enjoyed this book and look forward to hearing the next in the series.
"I was given this free review copy audiobook at my request and have voluntarily left this review."

I didn't want to put this book down.

What did you love best about Fallen Idol?

I really liked the storyline.

I usually take a couple of weeks or more to listen to a book. I finished this in two days. I had to work and sleep:( This was a good story.

Which character – as performed by Andrea Harbin – was your favorite?

I like Nobu the best. I hope I spelled his name correctly. He has a back story that they hint at and walks a fine line between today and his earlier life.

I like the scene where the main character and her sister have deep talk. Family dynamics can be interesting and messy.

Yes, this is well written. There are areas in need of polish and development for sure. The investigation has some holes in it, for example. Overall though it has interesting plot, fairly developed characters and as mentioned, a unique locale. Modern Day Japan. I would have liked a bit more story regarding Japan but overall a satisfying debut to what may be an interesting series!

For the most part it did. Again, the investigation at times, was helped along by some jumps in logic.

There are several, but I was actually caught up in the story by the opening scene. I can't be more specific since I won't leave Spoilers for other readers / listeners

This is a Noir Crime novel set in Japan. It was entertaining.

Thanks for the opportunity to listen and offer my opinions on this work!

A review copy was gifted to me at no charge. In return, I am happy to provide an honest review. Also at no charge.

The audiobook of this story is amazing, its twisted and full of secrets, I honestly love the singing we get at the start and bit of Japanese that is in this book, I do feel it was a bit robotic and not all the words were pronounced correctly but It is easy to over look and after some time it is hardly noticed.
Most of the women are strong and it shows a lot about the underworld and the cost of stardom. I felt the ending was a bit shocking but also not how I thought it would end.
This story is amazing and so worth the rea, and I am so happy I got the chance to check it out and can not wait to check out more from the series.

I got a free copy of this book in return for my honest review.

What made the experience of listening to Fallen Idol the most enjoyable?

The background and setting of the story

several characters in the office

no ideas about that

I was freely given this audio book by the author, narrator or publisher and I am freely offering my honest and unbiased review

Not being familiar with the Japanese language, culture or police techniques, this was interesting to listen to. It was the story of an apparent suicide -- but was it really? The parents of the dead girl want to know for sure and this desire leads to the world of sex, drugs, and the seedy underbelly of what people are capable of doing to each other and themselves. Compelling book that held my interest, and the only thing that I struggled with was not being familiar with the locale and unfamiliar names.

I was provided with a free copy of this book in exchange for an impartial review.

Kyoko and her two employees, Saori and Nobu, comprise the Nakimura Detective Agency, which has been hired to investigate the suicide of a former idol singer. The characters, while stylized, are intriguing and fun to follow. I especially enjoyed Nobu and the glimpses of his underworld background. The story is set in Japan, and author's locales and slices of daily life feel authentic. The mystery suffers a little as Kyoko works on the edges of the Japanese justice system, which is portrayed as being uninterested in truth or justice unless it can further someone's career. The twists and turns kept my interest. I hope there is some follow up to this book in the next story, as some things are left unresolved at the end. I received this title for free in exchange for an unbiased review.

Well worth the read/listen

I enjoyed the story, and in spite the narration it was worth listen to the entire book. The narrator sounded at times like a robot and unfamiliar with the Japanese words.
It is worth the read/listen just stay focused on the story
I was voluntarily provided this free review copy audiobook by the author, narrator, or publisher.
Note: When selecting books to read or listen to for reviews I try and select authors and stories that interest me. Sometimes I am fortunate and other times not so fortunate. Either way, I try to review the books with integrity

The story is set in Japan but other than a few random Japanese neighborhood names and some other references, it didn't feel quite convincing as a "Japanese" story. It could very well have been another Hell's Kitchen story.

And the narration kept bugging me throughout. The narrator is dragging the last word of every sentence for a longer than usual amount of time. Not sure whether it was an attempt to do an accent or what. It made it a bad listening experience.

Good part of the book was the premise itself. IRL, a movie actress from our film industry had died under similar circumstances few decades ago. So, this book's story was intriguing to me.

Could you see Fallen Idol being made into a movie or a TV series? Who should the stars be?

I can see it being made into an episode of an episodic crime thriller tv show; like Law & Order or Criminal Minds.

I voluntarily received this copy for free from the author / narrator / publisher and am leaving an unbiased review.