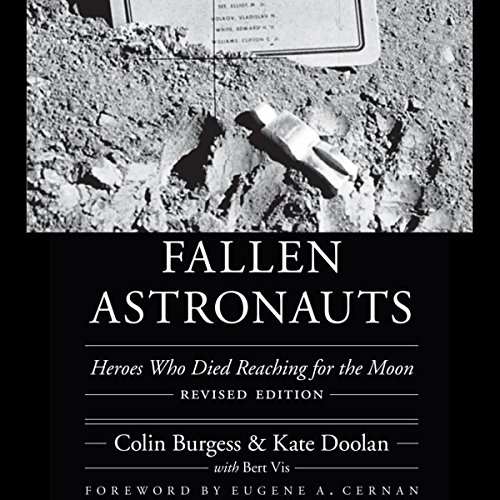 By: Colin Burgess,Kate Doolan
Narrated by: Mark Sando
Try for £0.00

Near the end of the Apollo 15 mission, David Scott and fellow moonwalker James Irwin conducted a secret ceremony unsanctioned by NASA: they placed on the lunar soil a small tin figurine called The Fallen Astronaut, along with a plaque bearing a list of names. By telling the stories of those sixteen astronauts and cosmonauts who died in the quest to reach the moon between 1962 and 1972, this book enriches the saga of humankind's greatest scientific undertaking, Project Apollo, and conveys the human cost of the space race.

Many people are aware of the first manned Apollo mission, in which Gus Grissom, Ed White, and Roger Chaffee lost their lives in a fire during a ground test, but few know of the other five fallen astronauts whose stories this book tells as well, including Ted Freeman and C.C. Williams, who died in the crashes of their T-38 jets, the "Gemini Twins," Charlie Bassett and Elliot See, killed when their jet slammed into the building where their Gemini capsule was undergoing final construction, and Ed Givens, whose fatal car crash has until now been obscured by rumors. Supported by extensive interviews and archival material, the extraordinary lives and accomplishments of these and other fallen astronauts - including eight Russian cosmonauts who lost their lives during training - unfold here in intimate and compelling detail. Their stories return us to a stirring time in the history of our nation and remind us of the cost of fulfilling our dreams.

What listeners say about Fallen Astronauts

What a great insight

Thoroughly enjoyed this captivating and factual story which tells the lives and loves of these fallen heroes. Funny in places and very sad in others, it brings home to us all the sacrifice these men and women made to bring the stars closer.

If spaceflight is your bag, I can recommend this, I dont think you will be disappointed

Whilst there were triumphs, there was tragedy and the sacrifices made for these triumphs was not alway documented.
Such an eye opener!

It’s so wonderful to see all of these astronauts memorialized. Such a great, respectful tribute. Well researched and well written.

A well-researched and respectful tribute to pioneering heroes of the Space Age written by one of the most respected historical journalists...utterly compromised by your poor choice of voice actor.

It's not just that Mark Sando can't get his tonsils around the technical jargon, he can't even seem to enunciate many simple ENGLISH words correctly. I started to keep a list of some of his ridiculous mispronunciations -- was the director MIA or something? -- but gave up in disgust after listening to him mangle "foundation" in a couple different ways in the same section of the book. Lazy, lazy, lazy.

And for god's sake, guys...NASA is pronounced "NASA"...*not* "Nassau." It's an acronym for our national space agency, NOT a bloody island in the Bahamas.

Get it together, people!