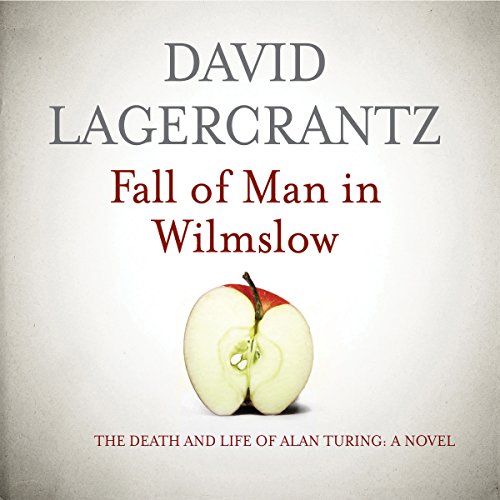 Fall of Man in Wilmslow

June 8, 1954. Alan Turing, the visionary mathematician, is found dead at his home in sleepy Wilmslow, dispatched by a poisoned apple.

Taking the case, Detective Constable Corell quickly learns Turing is a convicted homosexual. Confident it’s a suicide, he’s nonetheless confounded by official secrecy over Turing’s war record. What’s more, Turing’s sexuality appears to be causing alarm among the intelligence services - could he have been blackmailed by Soviet spies?

Stumbling across evidence of Turing’s genius, and sensing an escape from his narrow life, Corell soon becomes captivated by Turing's brilliant and revolutionary work and begins to dig deeper. But in the paranoid, febrile atmosphere of the Cold War, loose cannons cannot be tolerated. As his innocent curiosity fast takes him far out of his depth, Corell realises he has much to learn about the dangers of forbidden knowledge.

What listeners say about Fall of Man in Wilmslow

I need to be careful when writing this review. The storyline was fantastic and written superbly, with a fantastic spin on real life events surrounding a man of genius and supreme intellect. Alan Turing was a genius. Born in 1912 and died in 1954, this was an interesting take on events surrounding his "suicide".

You will notice I haven't given this audiobook a great rating. This is because I felt the narration was extremely poor, and I am sure that is the reason for my not liking it. However, that is not enough for me to slate this book. Especially as the first reviewer, I would feel I am not giving you a clear enough picture. I still recommend people buy and listen to this, maybe you will enjoy it more than I did. Just because I found the narration to be poor that doesn't necessarily mean you will.

Buy it and give it a go. I would rather be honest and paint a clear picture for future listeners rather than lie and say how great I found it just to chase "likes" on my reviews.

Great idea but lacked in execution. It felt too crafted but lacked engagement and built little empathy with characters. Worth a read/listen if you're interested in Turing.

An oblique look at Turing and the development of computing. I thought the narrator was perfectly suited to the quaint prose, a bit like the aural equivalent of an old movie. Loved it.

I came to this book because u limed the easy he had written the girl in the spiders Web.tyke subject is tragic and tells us s lot about the prejudice of war torn UK and post war Britain. I like the easy he weaves the story to expose the prejudice whilst exploring the struggles of those who were becoming more enlightened.

An academic detective novel with a lot of dialog on mathematics and philosophy! Including real people like Alan Turing. Combined with cold war spy conspiracies and codes. A bit slow in the start though, but the second half was good.