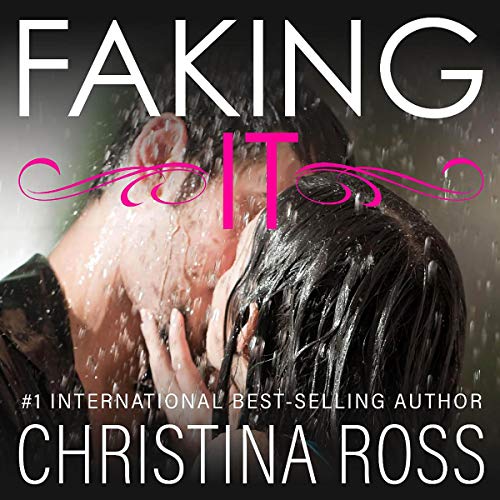 Faking It: The Making It Series

By: Christina Ross
Narrated by: Amanda Stribling
Try for £0.00

A sizzling new actress on the rise. A mega-hot action star's career in free fall.

Jackson Cruise is super hot, super successful, and his movies have made billions at the box office. But when he's caught up in an unexpected scandal, Jackson's career might seriously be sidelined if he doesn't offer the press something else to feast upon - like his love life.

Enter emerging actress Sienna Jones, who is offered millions to become Jackson's new girlfriend. Sienna decides to take the job and fake it, and before long, her star starts to rise as her and Jackson's fake relationship begins to trend on Twitter.

All while the actor's hunky security guard, Austin Black, looks on at Sienna in lust.

As Sienna and Austin become friends - and then a whole lot more after one steamy night of passion - the question is simple: How long can Sienna continue to fake it when she realizes that she's falling in love.

With Christina Ross' gift for delivering romance, humor, wit, and characters you'll love and never forget, Faking It will leave listeners swooning until the story is finished.

What listeners say about Faking It: The Making It Series

Such a great listen!

Sienna is an up and coming superstar, but what will propel her to stardom status? Being the fake girlfriend for a superstar actor! Jackson was caught on camera kissing his boyfriend, and now is in need of distraction to save his career. Sienna takes the role of Jackson's girlfriend for 8 months, but gets more than just the dream of being his girlfriend. Little does she realize what it takes to be a star. With her privacy invaded and a chance at love with Austin, Jackson's bodyguard, she has gotten much more than she bargained for. Will she be able to survive the contract to find her financial freedom? Is it worth losing the love of her life and her privacy? What will happen to Jackson? Ross creates characters that are impossible not to love. Austin is a big teddy bear, one you want to hug, but when in guard mode is deadly. Sienna is a woman who has a good head on her shoulders, is a great friend but is in over her head. Jackson is just confused. Can you be a hot, gay male actor? So much is going on, all so well woven together that you don't realize where the time goes as you listen. Between the great conversations, the good friends, the crazy agents and the paparazzi, it flies by and you had 8 hours of complete entertainment.

Amanda Stribling brings it all to life is a fantastic narration. I love her voices, all distinct and easy to follow. She is wonderful to listen to and finds her voices that perfectly fit in each element of the story. I really enjoyed this listen!

Romance between a movie star and her bodyguard

Who doesn’t love a steamy romance between a movie star and her bodyguard? It could have been better, but I liked it well enough.

I hardly felt the love though. Lust and desire, definitely. But Sienna had more chemistry with her fake boyfriend–who’s gay–than with Austin. There should have been more scenes of Sienna and Austin interacting, but they barely talked.

I enjoyed the subplot of Jackson dealing with his sexuality and the consequences for his career. It was kind of spot on, and the conclusion made my heart flutter.

Narration was good, although it felt like the guys were always grinning when they spoke.

It was a cute story.

It was a bit ridiculous
Bc of the insta love.
There was not much to the relationship
They’re both attractive they have sex and he falls for her.

Most of the story she sounds like a teenager. (Might be the narrators voice)
Also there is a situation where someone grabs her boob
And the rest of the story then goes on about her being sexually assaulted
And being a survivor of sexual abuse.

I don’t know it just fell a bit flat for me
Don’t think I’ll give the next one a listen.
Definitely not worth the credit in my opinion

The most memorable portion of this book was the going through the back door of Whole Foods. I also have a list of all the NYC restaurants I'll need to go to the next time I'm there.

Great story! Austin Black was a keeper, I could've told Sienna that. 🏅

This book was an interesting twist to a Hollywood romance type of book. I really enjoyed the characters and the narrator did a wonderful job.

I really enjoyed this story! Christina did a great job! A little bit of a lot of different emotions. Amanda did a great job with the different voices and emotions. I couldn't stop listening and hated everytime I had to pause it! Definitely worth a listen!!!

I really enjoyed listening to this audiobook from start to finish. I absolutely love Sienna’s character. This story will give you all the emotions. Also I need my very own Austin. I need more of this series please.

dilemma what to do when you are in situation like this.
very good story and the characters are well created and deep.
The narrator is very good.
overall well written and nice story

I read this book before I listened to it. I loved the reading portion of the book. It was a great love story with the best characters. I'm all about listening to books every single day, so one thing that makes audible books so great are the narrators. I connect with the stories I listen to, just as long as I like the narration. There was something about this audio version that I couldn't relate to as much as the story itself. I think of there was a male narrator for Austin, it may have been different.

This was a beautiful story about two people who fall in love with stipulations attached. Can you imagine?? Really imagine falling in love with some who loves you back, but you can't have. This story was brilliantly written with the exact amount of suspense and love without having the word "thriller" attached. And we all know the types of books CR can dish out. You never know what you are going to get.

So many things you can throw in a story, and she got them all I think. Sienna meets Jackson and forms a special bond, all the while falling for the one she just can't have. I truly couldn't put this book down, and anxiously awaited the next word, page and chapter. It's not your typical "let's pretend and sign a contract" books. Promise. It's much more. AND there are special things thrown in to annihilate you !!!! It's so great. I voluntarily reviewed this book sent to me by the author. I have read every single one of her books and will read everything she writes. This book is no exception. Phenomenal.