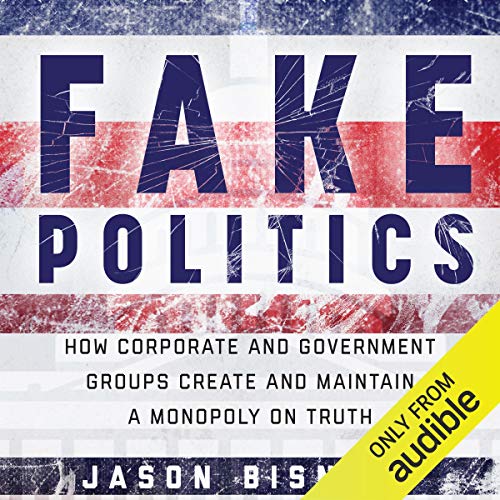 By: Jason Bisnoff
Narrated by: Brian Sutherland
Try for £0.00

In “grassroots” campaigns, the grass isn’t always green - or natural.

In today’s chaotic world, where the multiplication of information sources creates competing narratives, credibility is the key to winning the war of ideas. This is the reason why governments and corporations resort to astroturfing - creation of ostensibly grassroots movements set up to advance political agendas and commercial campaigns. The democratization of information and polarization of politics offer a perfect storm.

Fake Politics tells the stories of how this practice has transformed political activism into a veiled lobbying effort by the rich and the powerful. Through a series of vignettes involving the tea party, oil industry, big tobacco, big data, and news media, this book will explore the similarities and differences between various campaigns that appeared as grassroots, but in reality, were lobbying efforts fueled by governments, corporations, major industries, and religious institutions.

The process, named for the artificial grass fields at football stadiums and high schools across the country, became so prevalent in the last two decades that it now sits at a tipping point. In the era of “fake news” and “alternative facts”, with the truth well on its way to becoming indistinguishable from fabrication, what can the past of astroturfing tell us about the future of grassroots activism?

What listeners say about Fake Politics

Now do the Left and the democrats.

I was hopeful for a book that would expose the issues of money in politics and money used to sway public thought across the spectrum. Unfortunately the author only focused on one side of the political spectrum. So this book is more a partisan hit piece than an exposure of corruption. Left wingers will love this book, right wingers will probably turn it off, centrists will learn mainly about the authors own political biases. The author apparently believes only people on the right side of the aisle are corrupt or use PR campaigns to sway public thought, and that all left wing movements are noble grassroots campaigns with 0 money invested n them. Both sides are guilty of this kind of stuff.

Half of a Book

This book covered the interesting topic of "astroturfing", a term I am fairly certain the author made up, but what it means is basically corporations using social media (including bots or multiple accounts) to promote political agendas via social media. While there is no doubt that the cases in the book occurred to pretend that only corporations with a right wing agenda partake in this activity is exceptionally myopic. often the biggest corporations are fans of the biggest government and we regularly see corps exploiting social issues to curry favor with left wing candidates (no doubt more than the cases in this book). The author choosing to only look at half of the picture makes this book incomplete and come off as mostly ignorant, although I can at least say I took away a new piece of terminology from it.

reader is very bland, book is one sided

reader is bland,
topics are only one sided, so the sense of irony is strong. makes me want to research the authors background. but if you're just interested in how astroturfing is done... it's a tolerable book.

your apolitical bias is showing.

listened to the entire thing. this writers claims of facts have been proven false months after this book was written. seems to me he counted his eggs a bit too soon. I'm not even on the right of politics and it's obvious.