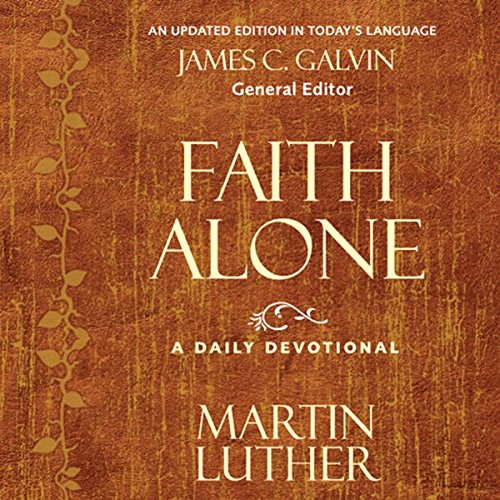 Freshly translated from the original German into todays English, this book contains a treasury of devotionals taken from Luthers writings and sermons (1513 to 1546), conveniently divided into daily readings to point readers to the Bible and a deeper understanding of faith.
Public Domain (P)2009 Zondervan
Bible Study Christian Living Christianity
Show More Show Less

What listeners say about Faith Alone

Would you consider the audio edition of Faith Alone to be better than the print version?

What other book might you compare Faith Alone to and why?

AM and PM by Charles Spurgeon.

What does Jonathan Petersen bring to the story that you wouldn’t experience if you just read the book?

He has a very nice voice, easy to listen to.

Not really, wanted to read it every day, and start over next year.

I enjoyed this well narrated, theologically and biblically well grounded Martin Luther devotional.
It is concise and yet contains very deep and pragmatic, applicable truths very relevant to our days.Martin Luther, no doubt is a giant Father of the evangelical Faith
I have read other devotionals for about four decades yet as soon as I stumbled upon this through research works, I fell in love with it. Our daily romance has been very fruitful. I recommend it to you too.

I am not hot on devotional books. I've tried many, and never found one I was happy with. I frequently found that day after day snippets eventually become trite. But this book is amazing! Martin Luther understands the daily life of a Christian struggling with sin in a world of sin. I couldn't stop with one golden point, but kept reading (and listening), as I drank from a fire hose. I'm on my second time through the book, and loving it. There is so much to think about; so much retraining my mind; so much I want to relearn about my Savior's love. Get this book. It will change your life.

What made the experience of listening to Faith Alone the most enjoyable?

It provides a window into the day and time of Martin Luther: a context by which to comprehend the magnitude of his struggle.

Two Things: 1. The throes of conscience of a man committed to truth. 2. The strength of character that prevailed against the most powerful entity in his world.

I liked the cadence and linguistic dexterity in his performance.

Strength in one man's truth.

Martin Luther was a man propelled in his quest for truth -- regardless of its consequences. His example in his defense before the tribunal reflected his depth of character and resolve to stand upon that truth regardless of its consequences. With the absence of absolutes in today's world, there is very little upon which to anchor one's moral compass. This history provides a clear picture of moral and spiritual clarity rarely found in today's society.

This book does a great job of explaining complex beliefs in the Bible in simple terms. I would recommend it to anyone whether they were a Bible scholar or just beginning to understand the faith. The only thing I did not like about it is that it’s chapters or not divided in such a way that is easy to stop between chapters.

I listen to this while I’m taking the kids to school, so we all get a little devotional before we face the day. It is basic in a good way, always good to be reminded and go back to the the basics, it’s what the foundation is made of!!

would like the chapters to be set by date...since it is set up to be a daily read....but still a great read...