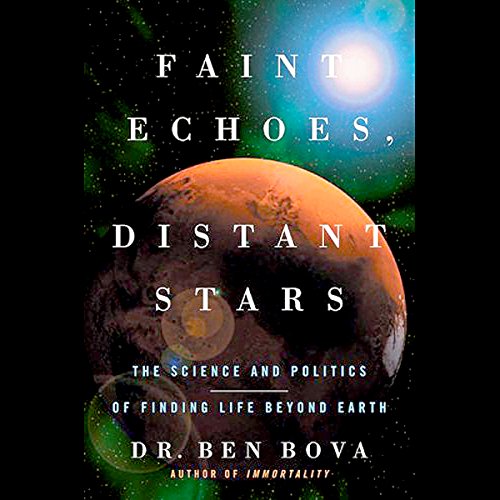 The Science and Politics of Finding Life Beyond Earth
By: Ben Bova
Narrated by: Stefan Rudnicki
Length: 9 hrs and 43 mins
Categories: Science & Engineering, Science
4 out of 5 stars 3.9 (7 ratings)

Our neighboring planets may have the answer to this question. Scientists have already identified ice caps on Mars and what appear to be enormous oceans underneath the ice of Jupiter's moons. The atmosphere on Venus appeared harsh and insupportable of life, composed of a toxic atmosphere and oceans of acid - until scientists concluded that Earth's atmosphere was eerily similar billions of years ago.

An extraterrestrial colony, in some form, may already exist, just awaiting discovery. But the greatest impediment to such an important scientific discovery may not be technological, but political. No scientific endeavor can be launched without a budget, and matters of money are within the arena of politicians. Dr. Ben Bova explores some of the key players and the arguments waged in a debate of both scientific and cultural priorities, showing the emotions, the controversy, and the egos involved in arguably the most important scientific pursuit ever begun.

"This book will excite science buffs while being accessible to general readers hoping to one day meet our extraterrestrial relations." (Publishers Weekly)

A good book, but quite out of date

while the book was interesting, a lot of the subject material and the missions discussed are in the books 'future'. As the book was published in 2003, some of the future missions it mentions (New Horizons mission to Pluto, the Rosette mission etc) have already concluded, and this gives the book a 'dated feel'.. this is unfortunate, as otherwise the content is very interesting.

Good info but out of date.

The first few chapters of this book provide some basic science. Mostly it is stuff that one would learn in a first year community college class. This book deals primarily with the politics of 2003. It is woefully out of date with current policies, politics, funding, and discoveries.

The book is well written and well read. If you want to know the basics behind a SETI project I do suggest you read this book.

The first hour of this 9.5 hour book was interesting, Then it became droll, boring and droned on like Charlie Brown's teacher. The amount of scientific detail is excruciating. The political side, of which Bova is usually very good, was painful. Rudnicki, the narrator, was exquisite, as always. DNF.

This is a story that needs to penetrate the world's psyche! As a society, we need to remain curious enough to expend resources on questions like this.....Good Job, Ben!!!!