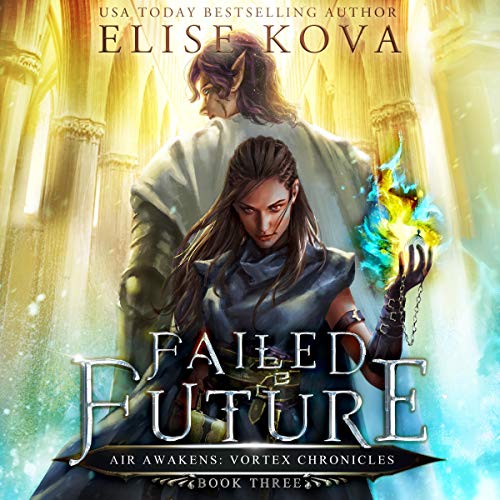 When worlds collide and things are rarely what they seem, there may be no one Vi can trust.

Having forsaken her crown for a chance to save her family and the world, Vi Solaris washes up on the shores of Meru. She's wounded and barely alive. But Vi's fight for survival is only just the beginning.

As a princess in a foreign land, everyone is after her. The pirate queen Adela wants to sell her to the evil elfin'ra. The Twilight King wants to use her to settle an old score. And, perhaps most dangerous, there is the scheming Lord of the Faithful who sees her as an opportunity to further consolidate his power.

The only path for Vi is forward. But she doesn't yet know if she's running toward salvation...or a brutal end to everything she loves.

Vi's journey continues with even more betrayal, romance, magic, and a twist you never saw coming that leaves listeners begging for the next book. Buy the audiobook now!

it was a bit slow at the beginning bit it got to me and I've been listening to it non stop. cannot wait to see what's happening next
I got a code from Facebook's group audiobx

This series is insane!!! In the best way

Um...what just happened??!!! I LOVE this series!!!! You know why?! Because it’s not cookie cutter. It’s not a harrowing adventure where the girl gets the guy, “the end!” I enjoy those kinds of stories. But this. When an author can take me on a totally unexpected journey that feels like I’m on a rollercoaster that flies off the track, I’m all in!

Add to it, this narrator KILLS IT! She is so flipping good! She needs to teach classes on audible narration because she is so much better than most narrators I listen to. She actually brings the story to life - changes voices, accents and inflections. She’s legit.

the story of Vi Solaris continues, and gets better as it goes! each book gets better with it's detailing and expansive foreshadowing. just wish. some parts were more of an adult type narration, but just my opinion.

Such a great story

For a middle book in a series so much happened that was absolutely pivotal. A lot of times I find middles books boring but not this one I fell in love with Vi and Tavin so much more than I already was. I did not want to put the book down! I can’t wait for book 4.

This was in interesting sequel in the Air Awakens series. I have listened to the first two books, and started the fourth book already. There was a bit of violence as you might expect in an epic adventure, but it wasn't particularly graphic. The ending was darker than the previous books in the series, and was also a cliffhanger. Because the heroine keeps traveling farther in the story, there is more interesting world building. It still feels like she is in the same world, but as she travels farther the author does an excellent job making it feel like she is visiting a new place, which has enough background to feel real.
The narrator does an excellent job differentiating the different characters, and making the audiobook enjoyable.

more betrayal and growth after Vi does things that she feels is right. This series is just amazing.

All kinds of twisty

The action picks up in this book and the twists... the twists gets more twisty and the conflict kicks up. I powered through this book in one sitting and I'm glad I didn't listen to it on a work day because nothing would have gotten done.
As I sit here to review this book I am finding it hard because everything I want to talk about and gush over is a bit spoilery.
If you enjoyed the first two books, then prepare to be blown away.
I have SO MANY theories about where this is going and I can't wait to see which are right.

The action and story line really pick up. I listened to this book almost in one sitting. I have some theories and look forward to seeing if they are right.

Keeps getting better! It keeps you on edge I really enjoyed book 3 can't wait to hear the rest of the series.

I received this audiobook free in exchange for an honest review.

Twists & turns abound! A rescue, a betrayal, & a What. The. Heck. Ending. Reading the next book is a necessity! Elise has a way with leading you along a path & then blindsiding you with a plot twist. It leads to awesome stories!
The narrator for this book is wonderful too!

I love this continuation! Vi is one character that you don't want to part from! Her trials and struggle will tug upon your heart and you'll be holding your breath. So much heartache drenched me throughout this and my mind was constantly turning as the pieces fell together. The narration was entertaining and emotionally intriguing!

Narrator did great. Really fit the story and gave a clear performance. She had good emotion portrayal in her voice. I’d recommend listening.

Love this book gets right into the action and adventure! Love all the magic elements and it was fun to be in a different type of setting. This is the 3rd book in this series, so I recommend reading the previous books if you haven’t. It’s a continuation story through the whole series. Vi and Taavin are finally together in person, but they are in dangerous territory. Vi is destined to save the world, but there’s also the issue of finding her father. Vi and Taavin are in for some adventures and meeting some new characters. Vi understandably has trust issues from being betrayed in the past, and Taavin has quite the bad reputation. There’s danger afoot all over! The romance is mostly sweet; I love the connection between Vi and Taavin. There’s a lot of stress on them both, which leads to some disappointing decisions. I like that Vi’s warrior is starting to come out; I just hope she uses her common sense too. There’s still tons of story to be told; this book takes an interesting turn towards the end, so I’m definitely excited to read where the story is going to go!