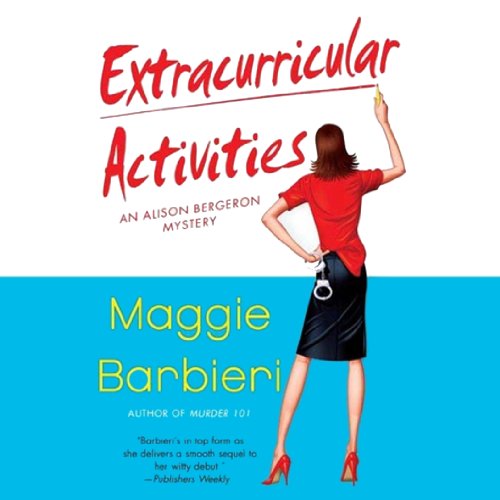 In Extracurricular Activities, Book 2, narrated with a good-sport cheerful spirit by Gayle Hendrix, poor English professor, Alison Bergeron, just can’t catch a break. First, she’s accused of a murder she didn’t commit in Book 1, and now she’s dragged into another murder investigation in this sequel. Lucky for her, such grossly false and wild accusations do mean working with handsome homicide detective Bobby Crawford, her on again, off again flame once more. Alison loves Bobby - when Alison doesn’t hate Bobby. The listener might feel the same about this audiobook.

You’d think, now that she’s off the hook for murder, Alison Bergeron, an English professor at a private college a stone’s throw up the Hudson from Manhattan, would be able to relax - but how can she with a wedding in the works?

Alison is happy for her best friend, Max. Really, she is. She loves Max, and the guy Max is marrying completely adores her. Even being in the wedding wouldn’t be so bad, if it’d keep her from thinking about her off-again relationship with the married NYPD homicide detective Bobby Crawford. (Actually, if you want to be technical about it, he’s separated, has been for years, but Alison is still getting over her own divorce and she’s trying to make good decisions.) However, Bobby’s the best man, and that forces them into all kinds of awkward situations, like dancing cheek to cheek and sharing a bottle of champagne.

Then, when Alison’s ex turns up dead, she’s dragged into another murder investigation. Convinced it’s the handiwork of one of her former student’s parents, a local Mob boss, and afraid for her life, she turns to Bobby for help, but threatening a Mob boss while he’s fulfilling a vendetta may not be the best idea.

Romance, humor, and murder are sure to mix and mingle whenever Alison and Bobby link up in Extracurricular Activities, Maggie Barbieri’s second charming mystery.

The main character is so human, quirky and fun. Lots of things going on, hated to loose, well, you gotta hear it to find that out!