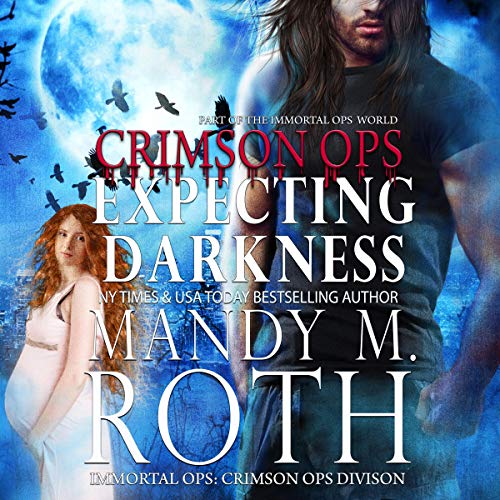 Searc Macleod is an immortal vampire special operative with paranormal security and intelligence's "Fang Gang." He's fought for the side of good for nearly a century. But it turns out; his past is never far behind him. When his sire summons him, demanding Searc protect the master vampire's only daughter - a woman Searc has lusted after since she became of age - he knows things can only end badly. He can barely resist the temptation of Jessie Buchanan as it is. Finding out she's been subjected to testing at the hands of madmen, sets his demon on edge, and ignites his hunger for her. He'll do whatever it takes to protect her and the precious cargo she's carrying.

What listeners say about Expecting Darkness

So Freaking Awesome. It's full of twists that will keep you wondering and reading. Then you will find yourself laughing so hard your might start snorting, LOL , I did just that. I Absolutely love these book . I NEED OF A GREAT BOOK READ THIS. I GUARANTEE IT WILL HAVE YOU LAUGHING.

Love 💘 this series. I can't get enough of her characters. The narrator is awesome

The series started out good and is seriously petering out. The book should have been named expecting terribleness.

Full of the supernatural

What a great action filled adventure. I loved the storyline it is action filled and keeps you on your toes. The characters Searc and Jessie are soo much fun they are interesting and intriguing. They fight together and become a perfect fit. Great adventure from start to finish. Can’t wait for more.

In this story we find how the Corporation does it dirty works and we learn more about the Fang Gang. This was a wild ride. D. C. Cole continues to be a very good narrator as he takes us into Mandy M. Roth wonderful world.⚘⚘⚘

The team members of the Fang Gang are running a close second pushing a tie with the snarky mouths and stunts of the Immortal Ops. Searc, another Scot, left his spot as second to his maker to join the Crimson Ops. When his maker calls him to protect his daughter, Searc is torn between the need to protect her and his intense desire for the woman. He has fought that fierce need for years.

The Corporation has done so much harm to humans and supernaturals alike now threatened the woman he loved. Watching Searc and his maker, a master vampire with immense power, fight over the need to protect Jessie, keep her safe, and keep her out of the bed of the one man trusted to keep her that way. The overprotective supernaturals around the woman are unprepared for her strength. She may be a girl. She may not have shown any real superpowers, however, she is the daughter of one with both.

It is such fun to watch his team push his buttons around Searc and Jessie. They know who she is to him which justs eggs them on to look and talk about how hot she is. The big bad vamp has some friends he can count on in battle and in the super prank department. We'll get to experience the **** of the week awards with Jessie, reminding us of other great books. There is always steam aplenty with these more-than-human guys and this is no exception. Searc's been waiting for years. Look out, Jessie!

You can always count on the baddest of the bad guys, the best of the good guys with some gray undertones, the hottest guys and gals, steam, and strong females to match those hot guys. The stories never disappoint, leaving us waiting and wanting more. I'm loving the Fang Gang stories and can't wait to see the rest of the team meet their female matches.

This it the second book in the Crimpson Ops Series. I love Searc and Jessie. They share an amazing chemistry. The story is fun, intriguing, action packed, suspenseful, and steamy! D.C. Cole did an amazing job with the narration. I love his voice!

Searc is a badass kilt wearing Scots man who also happens to be a vampire. He is part of the immortal Ops organization protecting humans from other supernaturals. Jessie is the daughter of Searc’s maker so she is totally off limits or she should be. Expecting Darkness is smoking hot with plenty of suspense and intrigue along with plenty of humor. D.C.Cole is amazing with his narration. Can’t wait to see what happens next and to go back and pick up the first book as well

This book runs parallel with the first book in this series, Midnight Echoes so I would recommend you listen to that one as well. I am really enjoying this group of paranormal characters. They have such a great connection with each other and will do anything that is needed for anyone in this group. This couple was super fun to listen to as well. The struggle to find your mate and yet try to hide it is huge, but we finally get there in the end. I am excited to see what comes next with this group.
Narration was amazing!