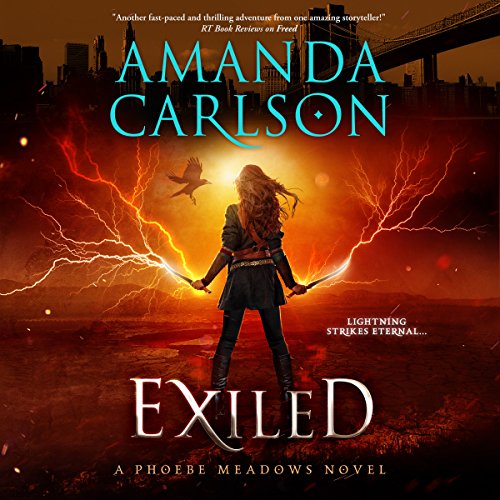 Phoebe Meadows is on trial for her life. After freeing her half-brother, Baldur, Phoebe is set to stand before the Council in Asgard to answer for her actions. The threat of exile if she's found guilty looms, not to mention the added stress of meeting her real father for the first time. Upon entering Asgard, Phoebe discovers new allies in a half-brother she's never met as well as an oracle who is in possession of valuable information. A little added help couldn't have come at a better time, because when Phoebe is tossed into an unknown realm, she's only armed with Gundren, a jewel, and her wits. When Loki shows up, all bets are off. The trickster god throws a wrench in Phoebe's plans and kidnaps Fen, her only ally. And just when she thinks she sees the light at the end of the tunnel, Phoebe finds she has to defeat one last obstacle: The Norns. And they aren't planning to go down without a fight.

What listeners say about Exiled

I loved this book! It was so good and there was an interesting development at the end that I can't wait to see the direction of in the next book!

I had a great time listening to the audio book! It was so good and there was an interesting development at the end that I can't wait what comes next.

Book 3 in the Phoebe Meadows series is just as great as the first two were. I enjoyed the story, loved the characters, and am going to look for more audiobooks by this author and some more by this narrator.

I really liked the ending to this one. Good things happened to good people, bad things to the bad ones. Kind of a little happily ever after type ending but with plenty going on that could lead to several more books. I hope there will be several more books!

The narrator is the perfect choice for the books in my opinion. She really brings Phoebe and the others to life and makes the books even more enjoyable.

I was given book 3 for an honest review.

What can I say? I've loved this series! Each book just gets better and better. I'd originally listened to books 1 and 2, one after another, and when I saw Ann Craven offering the audiobook of book 3? Well, needless to say, here I am.

Let me state that Emma Wilder is a great narrator! I don't come across many narrators that I have to go back to for another listen, but her and Valerie Gilbert are my top two female narrators (males are R.C. Bray and Scott Bennet).

I didn't really have any issues with this story. The beginning took me a bit to get drawn into, I'm guessing it was because of the time gap between book 2 and 3. After a bit, the variety of characters (who they are and how they fit into the story) came back to me and I was good.

My only question:
Why did Mrs. Wilder narrate Grete (Phoebe's grandma) the way she did? Grete's voice was very slow with random pausing between words; I didn't understand that. Other than that, I would definitely recommend this series, this narrator, and this author to others.

If you could sum up Exiled in three words, what would they be?

What does Emma Wilder bring to the story that you wouldn’t experience if you just read the book?

She does such an amazing job with so many different types of voices! She really brings the story to life!

I love this series!! I'm sad this is the last of Phoebe's books, but it seems there is definitely something new in the works with some of these characters, and I'm totally excited for that!!! Exiled is the 3rd book in the series, and picks up right where the last book left off, so definitely read the previous books first because this whole series is Phoebe's quest. Phoebe needs to go to Asgard with Fen, and stand trial for some of her actions, and then she needs to go save her brother from Helheim, and on top of all that she still has the Norns after her, and then Loki decides to put his finger in the pot to mix things up further. Can I just say, "The Gods are Boneheads!" They create so many problems! And don't listen to reason! I absolutely love when books go to Hell type places like Helheim or the Underworld, it's always interesting to see an author's take on that type of World, and I really enjoyed Amanda Carlson's portrayal of Helheim, and Hel. This book still has all the awesome creatures as the other books, and it also adds new ones! I love how detailed the story is! Phoebe and Fen are still going strong, and I fell even more in love with them in this book! So sweet! I would love to see even more of their relationship! Phoebe totally kicks butt in this book; although, I don't have any idea why she just doesn't say what she needs right away to certain people! It causes more problems for Phoebe than if she would just tell people her bargain, but luckily she's a survivor! I listened to this whole series on audiobook, and the narrator is super amazing! She does so many different voices! Human, Goblin, Troll, male, female! It doesn't matter, she does them all wonderfully! I have so much love for this series! And will definitely be checking out more from Amanda Carlson!

A fabulous addition to the series

I’m wondering if there’s going to be more books in this series, the way this book left off it could be finished, there wasn’t anything left unresolved, and yet it also left the possibility for many more adventures in the future both for Phoebe & Fen and for other characters, which means there could be more books, or a spin off maybe. I hope there are, I’ve loved the three books so far.

This book picks up right from where book 2 ended, we finally make it to Asguard… and what a fascinating place that turns out to be! From the moment they arrive the action doesn’t stop.

The book is filled with interesting locations, fascinating people and plenty of twists and turns. The descriptions are vivid and I could easily imagine I was watching everything happen. There are laugh out loud moments, and ‘oh no, I’m about to cry in public’ moments as the book drags you along on an emotional journey on pace with the characters journey.

It probably goes without saying, but if you loved the first two books then this one is just as good! If you haven’t read the first two you should be aware this is a series that needs to be listened to in order.

This book was supplied free by the author/narrator/publisher and I voluntarily wrote this honest review.

I might have said this before, but this series reminds me of the Percy Jackson books. it's so much fun. the narrating was fabulous and the writing was great! can't wait for the next release!