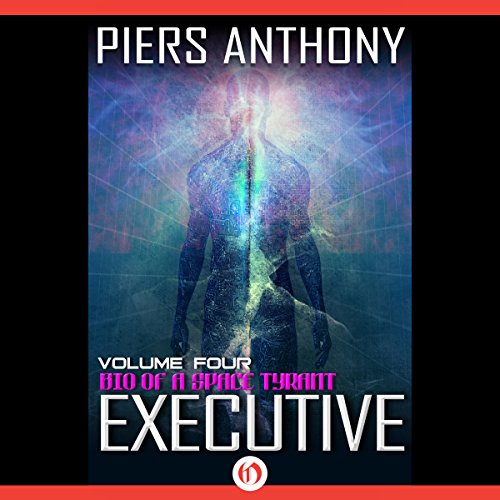 Doomed to a Madman's Hell

He was shaping his times as no one before him had dared, mercilessly scouring an entire planet of crime and corruption wherever he found them - and destroying anyone who stood in his way. Absolute dictator of the United States of Jupiter, Hope Hubris was destined to become the most hated and feared man of an era, a tyrant charged with countless heinous acts and sexual cruelties. Yet justice remained his fiercest passion.

Now, to ensure his goals, Hope would assume an alternate identity and become a rebel - the brilliant leader in a revolution dedicated to his own overthrow. To fulfill his dreams, he would sacrifice love...and plunge headlong into madness....

What listeners say about Executive

The story is unusual

For people familiar with Piers Anthony's writing style, this was the series that showed me that for Mr. Anthony, writing style is as much a function of the series as the cast of characters. I think it amazing that he could write this at the same time as Xanth books and others in different styles.

I did not care for the narrator's Winchell -like newsreader delivery. It distances the reader from the story, while I think a more immersive reading of the book would be better.

It didn't put me off the audiobook series, though. Great book!

Liked 1 and 2 then 3 jumped the shark. Absolute garbage. Don't bother with this series.

If you made it this far, keep going.

So if you've made it to the fourth book you know the characters and how great the narrator is, well some where along the lines the author decided to have our boy start making... I don't know, goofy decisions. I won't go into it, but the story is still solid with maybe a little less of the brutal-ness some readers may remember from Book 1 Refugee. This one is more of a scifi political thriller than the horror/dark scifi that is Refugee, than the military scifi that is Mercenary, and than the mystery/espionage that is the Politician (books 1,2 &3). Still many interesting stories, but I feel that this is the waning of Hope's sanity, integrity and of course brutality.

Another great piece by Piers Anthony

Continuing the series, Anthony keeps ahold of you and doesn't let up on this fantastic story