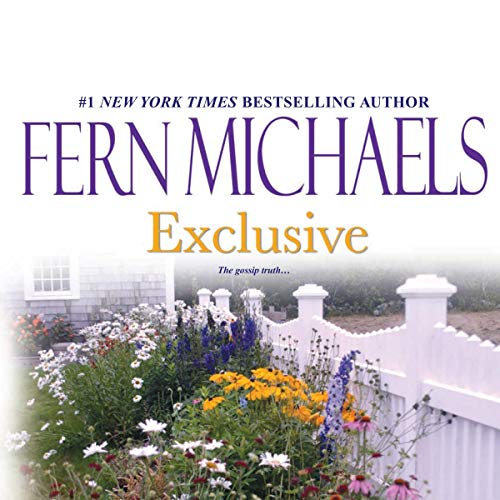 When Toots Loudenberry relocated to Los Angeles from South Carolina to be near her daughter, Abby, she expected to bump into the occasional celebrity. She just never expected them to be dead.

Meanwhile, Toots, Sophie, and Mavis are concerned that the prestigious Dr. Sameer’s budding romance with Ida may have something to do with his ailing bank balance. And Abby’s attempted makeover of the celebrity magazine The Informer into the most talked-about tabloid in town could end more than just her career.

But the Godmothers wouldn’t be the Godmothers if they weren’t pulling a few behind-the-scenes strings, and Abby’s hopes of changing the fortunes of The Informer are still alive. Yet it’ll take an assist from a source no one could have predicted, let alone see, to secure a story that will shake Tinseltown to its very core

What listeners say about Exclusive

Just as warm as the previous book in the series, this one has a little more danger and excitement in it, as the Godmothers face living crooks and dead celebrities in sunny Los Angeles. A wonderful and skillfully told sequel that left me with a smile on my face, looking forward to the next book in this series.

It felt like Fern Michaels had to run out the door in a hurry when she finish this one. I really can’t believe it.

The adventures just keep getting better!

I love these characters for their wit, kindness, honesty, strengths and flaws. I love listening to their adventures and the narrator does an excellent job of giving each character a unique voice.

When does the good stuff begin? I'm only part of the way through the book and so bored already. Ida can't do without a man - WE GET THAT! If I can just get through this part, it might get better. I'm holding out hope. The first book was good enough to get me to purchase the next, but I won't be purchasing anymore and may request a refund. Worst Fern Michaels book so far.

2nd book of series. Not as complex as first but all characters were back. enjoyable characters eve. with all their flaws. plot was light but intriguing.

loved it and can't wait to read the next. book. these women are a hoot!

If you could sum up Exclusive in three words, what would they be?

Sophie, I liked her tell it like is attitude

All of them, where the Godmothers were so honest and humorous with each other. True friendship

If you could take any character from Exclusive out to dinner, who would it be and why?

Sophie, I like a person who is honest about their feelings and isn't afraid to hurt your feelings

Would you listen to Exclusive again? Why?

I WOULD WHEN I HAVE FORGOTTEN THE STORY LINE

EXCELLENT ON ALL COUNTS

If you could rename Exclusive, what would you call it?