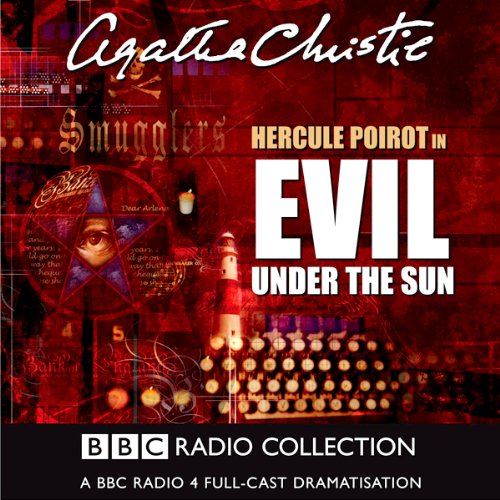 Evil Under the Sun

As Poirot follows a twisting path of bizarre and bewildering clues, his only certainties are that the solution lies within Arlena herself, and that there is evil under the sun.

What listeners say about Evil Under the Sun

I listen to this over and over. A great cast too, poirot is the best

I am thoroughly enjoying these dramatisations as they are so easy to listen to. John Moffatt as Poirot is brilliant. He is up there with Suchet who was brilliant on screen. Great cast as well and more in keeping with the book as we!ll. For anyone who has seen the film with Peter Ustinov as Poirot this adaptation is more to the book. Have several to get through!

One of my favourite Christie whodunits brought to life by a good cast. Moffat is the radio Poirot for me. Being picky I find George Baker an actor better to watch than listen too but he is still competent. My kids (aged 10 and 8) love all the BBC radio adaptions too especially on camping trips or long car journeys.

A superb performance from all concerned. A thoroughly entertaining listen and an utterly pleasurable few hours spent in the company of Poirot and his little grey cells.
A good story, an excellent recording complete with atmospherics and a wonderful cast.
Recommended.

Good story with excellent players, if u r a poirot fan I can recommend this

My first full Audible book. Some of the plot was different but I absolutely loved this BBC production of it. The voices, the music and narration were really great. Nice one!

I enjoyed listening to 'Evil Under the Sun' very much and it makes one feel that they are part of the story.

Enjoyed listening to it very much. John Moffat is very good as Hercule Poirot. The other actors were good too.

What did you love best about Evil Under the Sun?

The performances were wonderful and the adaptation of the book very skillfully done.

What other book might you compare Evil Under the Sun to and why?

Any of the BBC recordings of Dame Agatha's books are worth a listen.

I love John Moffat as Hercule Poirot. He really captures his fussiness and intelligence.

There is no vacation from evil.

Always clever, always entertaining, and utterly interesting. Evil under the sun is skilfully performed by an awesome cast, and is such an excellent story. I love Agatha Christie.

The dramatized version really brings the characters to life. One of my favorites audiobooks. Well done.

I really enjoy the BBC radio broadcast of the Poirot based novels. Evil Under the Sun is performed to perfection with John Moffat's expert narration as Poirot. Love the music and sound effects in the background.

Ending Too Absurd and Tired

Having read Agatha Christie books as a juvenile, I didnt realize how tired and farfetched her plotlines were. John Moffat is excellent as always portraying Poirot, bit he cannot do anything about this absurd ending. Shame.