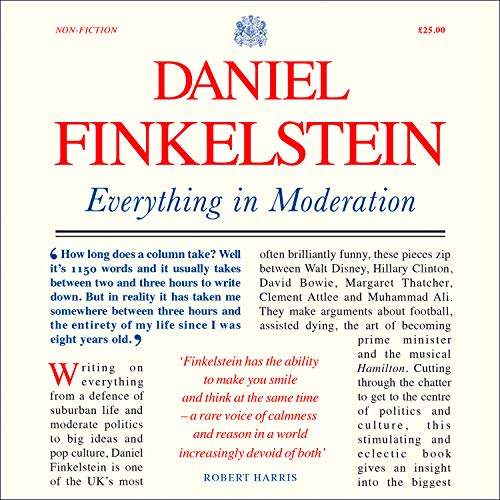 ‘How long does a column take? Well it’s 1,150 words and it takes usually between two and three hours to write down. But in reality it has taken me somewhere between three hours and the entirety of my life since I was eight years old.’

Writing on everything from a defence of suburban life and moderate politics to big ideas and pop culture, Daniel Finkelstein is one of the UK’s most entertaining and widely read columnists.

This collection brings together Finkelstein’s greatest writings from The Times, ranging from the personal - with his articles on growing up Jewish in Hendon Central and on the deaths of both of his parents - to the political, with columns on how to predict elections, the way political science showed us Ed Miliband was on his way to defeat and why the base rate of coups meant Jeremy Corbyn wouldn’t be ousted before an election.

Wry, informed and often brilliantly funny, these pieces zip between Walt Disney, Hilary Clinton, David Bowie, Margaret Thatcher, Clement Attlee and Muhammed Ali. They make arguments about football, assisted dying, the art of becoming prime minister and the musical Hamilton. Cutting through the chatter to get to the centre of politics and culture, this varied and stimulating audiobook gives an eclectic insight into the biggest conversations of the modern day. Everything is here. In moderation of course.

"This is Danny Fink at his very Danny Fink finest: elucidating, wise and intensely curious - always searching to explain the political from the places few other writers dare to go - be it a Finnish ringroad or a Coca-Cola focus group.... In this collection of columns, Danny reminds us of a singularly profound truth - that all politics comes back to the messy rub of humanity - the small personal triumphs and the unforgotten indignities. It is his deep understanding of human nature that makes this book funny, warm and percipient. A joy." (Emily Maitlis)

"Finkelstein has the ability to make you smile and think at the same time - a rare voice of calmness and reason in a world increasingly devoid of both." (Robert Harris)

"Through the clarity of his words and the depth of his insight, Daniel Finkelstein has been a voice of moderation and reason amidst the anger and uncertainty in British public life. His wisdom has now been captured in this collection which should be required reading for all who seek a better and more hopeful future." (Jonathan Sacks)

What listeners say about Everything in Moderation

Too much politics, not enough Pinner

I enjoy Daniel Finkelstein’s columns in The Times but I don’t remember there being as much politics in his columns (and I know he used to work in politics). There was plenty of humour in his columns and plenty about his life in Pinner but there is little of this here.

As a side issue, I have problems with his pronunciations at times. Can someone please tell him that the country is America, not Amarica. Also, David Bowie. The Bow in Bowie rhymes with Low, not with How.

If you love Daniel Finkelstein’s columns then you’ll really enjoy this selection. So much to think about. I’m no Tory but I really enjoyed this. Highly recommended if you are interested in politics.

Too much moderation might not be a good thing

Daniel Finkelstein is the son of a Jewish refugee who has a life long love of current affairs, football and The Times. He took over a weekly column in The Times from Michael Gove in 2005 and has written c1,500 words of pithy commentary on events of the week that is published every Wednesday. I read his column occasionally and it usually has an interesting take on the world.

This book, read by the author, consists of a number of Mr Finkelstein's articles categorised by theme. As I listened to this, patterns started to emerge and after a while the author's modus operandi becomes clear. Mr Finkelstein states that he has read the biographies of 33 British Prime Ministers and he frequently draws parallels in his weekly column with events in the days of Disraeli, Peel and Pitt. He has an encyclopedic knowledge of British politics and, whatever the issue of the day, he is able to find a similar dilemma from the past. In the weeks when the news is slow he publishes his article on cultural icons such as Walt Disney, Chuck Berry, the Beatles or David Bowie. Winston Churchill is derided by the author as a white supremacist and Mohammed Ali is similarly derided for his extreme political views.

Mr Finkelstein describes himself as a moderate who obeyed the law as a child and would not even tape music from the radio. A former member of the SDP who became a Conservative when Mrs Thatcher resigned, he writes about his admiration for his former bosses William Hague and and John Major and holds Tony Blair in high regard. He is scathing about Theresa May and saves his greatest level of vitriol, slightly bizarrely, for Gordon Brown and the reader can only surmise what might have happened between the two of them at some stage to cause this.

This book covers the Scottish independence referendum and the Brexit debate (Mr Finkelstein is a remainer) and takes us up to Theresa May's resignation in 2019. Given the world events of the past twelve months (Boris Johnson, Trump, COVID 19) we can look back on the years covered in this book as simpler times. Mr Finkelstein considers that politics is about creating an illusion that you are in control, this may well be the case but too much in moderation may not actually be good for you.