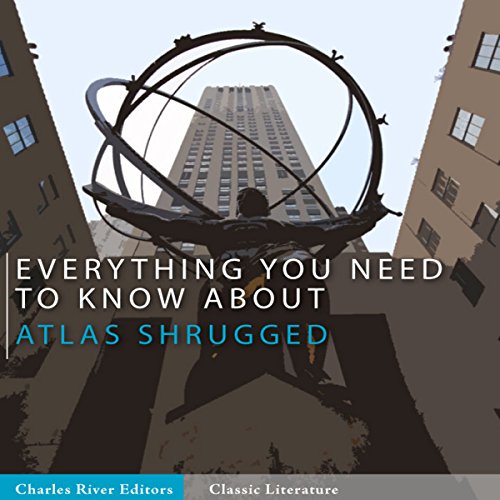 Everything You Need to Know About Atlas Shrugged

Learn everything you need to know about Atlas Shrugged, quickly!

This audiobook includes a discussion of the plot, characters, main themes, and political philosophy of Ayn Rand.

In 2009, with the global economy hemorrhaging jobs and Western governments using hundreds of billions of dollars in taxpayer money to "bail out" troubled financial firms and large companies, frustrated people and political analysts turned to a book written over 50 years earlier as a guide out of the abyss.

Though Atlas Shrugged had been a popular title when Ayn Rand published it in 1957, it's quite possible that the only reference to it that many Americans heard before 2009 came from the hit TV series Mad Men. However, this staple of conservative and libertarian readers took on new life as the new Obama Administration sought to use government resources to fix financial problems.

Conservative commentators like Glenn Beck and Rush Limbaugh praised the book to their audiences, and Supreme Court Justice Clarence Thomas labeled it one of his favorite novels. By January 2009, one article in The Wall Street Journal was titled, "Atlas Shrugged from Fiction to Fact in 52 Years".

In that time, the giant novel that Rand considered her magnum opus has seen its sales spike dramatically, eventually reaching the top of Amazon's best sellers list. Even today, it is still within Kindle's top 500 titles, making it one of the most heavily read books of the last several years.

Today, many have heard of the title and are partially familiar with it, but the sheer size of the book makes it inaccessible for people who don't have a lot of time to read or ponder Rand's philosophy. Thankfully, that problem is now solved with Everything You Need to Know About Atlas Shrugged, a primer that can get anyone caught up to speed on the plot, characters, themes, symbols, and philosophy of Rand's classic

The summary does an excellent job at listing and explaining key themes from the Novel but fails to motivate one to read the Novel.

Quite the bastardization of one of the world's most profound novels. What was the author/narrator thinking?

$$$ music ,sex and a Brige to no where, strikes in company. where a lack of production is the goal.. Sounds like today

Can't Believe I Burned A Credit On This!

Have buyers regret, should have asked for a refund. The level of this very very short book was that of a junior high book report. Provided no new insights at all.