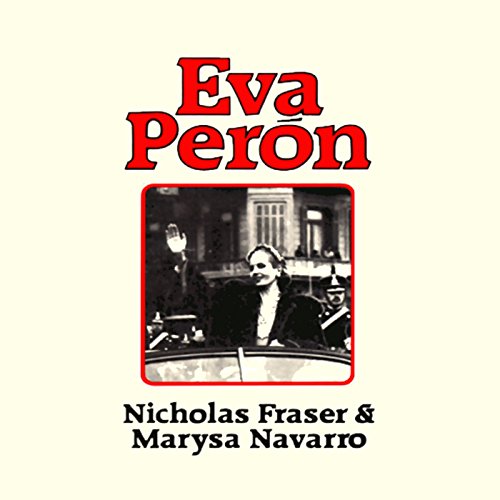 By: Nicholas Fraser, Marysa Navarro
Narrated by: Nadia May

The story begins in a dusty village lost in the Argentine pampas, where a girl, born out of wedlock, scrambles her way to the capital city by the time she is 15. It ends with the embalmed corpse of Eva Peron being hidden away by nervous politicians for fear that if the working people of Argentina knew where it was buried, it would inspire them to revolution. In between, she became first the actress Eva Duarte, then the mistress of Colonel Peron, then, in October 1945, after the "shirtless ones" had swept Peron into office, the president's wife. In the colorful, tumultuous setting of postwar Argentina, she wielded a power, spiritual and practical, that has few parallels outside of hereditary monarchy. She was literally idolized by millions but was hated and feared by many as well. She became Evita the legend.
(P)1996 by Blackstone Audiobooks

What listeners say about Eva Peron

Well narrated throughout this is an articulate and compelling account of a genuine icon. Difficult to remain indifferent about this enigmatic woman from the wrong side of the tracks.

Influential and adored by millions, dead at 33, this account is detailed and fascinating.

After seeing the musical, I wanted to know more about Evita. This book does a fantastic job in seperating the myth and legend from the real-world person. One of my favorite listens.

Would you listen to Eva Peron again? Why?

This story is very informative, lots of dates and facts as well as quotes from relevant people. Also takes into account the history and time period. Gives good insight into the public's view of Evita. The only down side is that the the voice actor is horrible. She changes voices and accents for Evita frequently, once she even gave Evita a french accent. Rather frustrating. The quality of this recording is overall very low, a lot of static, sounds very old.

Would you be willing to try another one of Nadia May’s performances?

I love all stories Argentina, and I appreciated the history lesson. Excellent listen, wished it was longer.