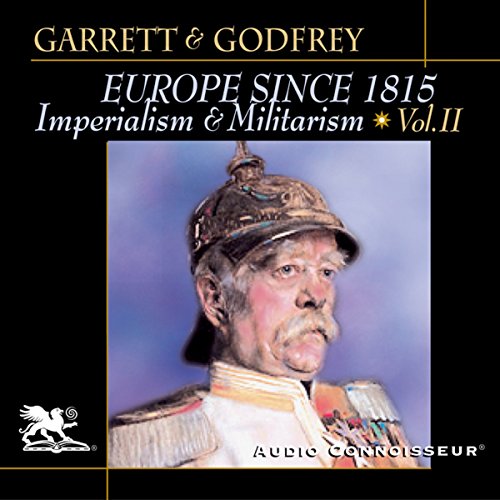 19th century Europe produced some of the greatest soldiers, statesmen, scientists, artists, and thinkers of any period in recorded history. And by the middle of that century nationalism had emerged triumphant from Ireland to Greece, and many new nations, including Germany and Italy, had appeared. But nationalism was accompanied by a chauvinistic impulse toward militarism.

At the same time, new explorations were beginning to open the continent of Africa to colonial opportunities, an activity also pursued in Asia and the Pacific. Along with the new political developments came astounding scientific advances led by men like Louis Pasteur, Charles Darwin and Alfred Einstein.

Meanwhile, the economic theories of Marx and the philosophical musings of Nietzsche roiled the minds of millions and produced profound undercurrents of political and social tension. Across this fabric of seething ethnic emotions and boundless imperial ambition strode the mighty figure of Otto von Bismark, the greatest statesman of his era. With his unshakeable belief in blood and iron and an unerring eye for compromise and balance of power, Bismark guided the German Empire to the pinnacle of success only to have his life's work threatened by the impetuosity of the egocentric Kaiser Wilhelm II.

Listen as this great work unfolds and learn how the fabulous civilization of Europe strutted across the world stage in a glittering sheen of self-aggrandizing splendor, while unconsciously choosing the path to disaster. As autocratic and backward Russia and Turkey lurch from crisis to crisis, and the other European states watch German militarism with a growing sense of dread, revanchiste France bides her time. Secret alliances and an uncontrollable arms race follow, while Europe awaits the spark that will set off a conflagration that many have long expected.

What listeners say about Europe Since 1815, Volume 2

This book offers more details than many people will want to know, but I found it a useful for integrating several European history classes I've taken in the past. It's far more detailed than a survey, but less detailed than a tightly focused look at a single incident. It has helped me understand current European affairs better, as well as the impact of the Industrial Revolution and emergence of political systems. It's not spritely writing, but it is informative.

When was this written?

Good luck figuring out when these volumes were written. As a history of Europe this is a fairly good overview, but it is tinged with the prejudices of the age in which the authors wrote it. Some statements jar a little on the ears of a 21st century listener and not just because the narrator is truly awful. It would help to know in which era the historian lived to sort out why something might sound wrong, biased, or outdated. Nowhere in the audible.com entry for this product does the date of publication appear. A search on the internet turned up a 1947 copyright, and the author apparently died in 1959. There is no evidence of updated editions, yet the final chapter contains references to the end of the Cold War and other late 20th century events. Students of history need to know the basic details of publication to decide whether to buy this product or not so if you are that serious about understanding the facts, be aware.

For the average person, European history during this most important period, is fairly opaque. This book zeros in on, and more importantly, connects the dots between the events. This book could be a text book if schools had any interest in teaching history anymore.

Good series and not too disjointed or biased. Good review of 19th and 20th centery history.