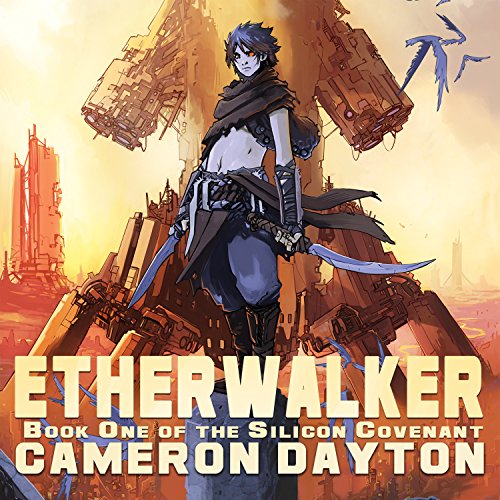 By: Cameron Dayton
Narrated by: Kirby Heyborne
Try for £0.00

The world is broken. The powerful machines that once ruled over land and sky fought and died, leaving humanity in a primitive age of swords and monsters. But that was long ago, and only legends of the Schism remain.

Enoch has never been frightened by these tales. He sees things differently from the other youth in Rewn's Fork, and that makes him an outcast. Where others see crops and weather and flocks of sheep, Enoch sees numbers and patterns.

When he accidentally awakens a powerful artificial intelligence, he discovers the truth behind his peculiarity - Enoch is an Etherwalker, the last in a long line of powerful technopaths who can control machines with their minds. Without knowing it, he has triggered the ancient Hunt, and now legendary monsters are hungry for his blood and bent on his extinction. They know he has seen the truth behind the broken world, and, if he survives, he may have the power to shatter it...or to make it whole again.

What listeners say about Etherwalker

A great story, a brilliant idea. Just a shame that no other follow on books have arrived on Audible.

What a pleasant surprise!

Bought this title on a whim. What a nice change from the standard fantasy recipe.
Fun and funny characters, great world building. Love Rictus, his guitar and the lifebeat that keeps him going.

Where does Etherwalker rank among all the audiobooks you’ve listened to so far?

Out of the countless audiobooks I've listened to, this is definitely one of the best.

What other book might you compare Etherwalker to and why?

The wonderful thing about Etherwalker is that it is so unlike many sci-fi or fantasy books. It has the characters story structure of many sword and sorcery stories, and a post-apocalyptic sci-fi setting.

What does Kirby Heyborne bring to the story that you wouldn’t experience if you just read the book?

I don't know if anything can top a reader's imagination in terms of experiencing a story; but Kirby does an excellent job lending different voices to all of the characters and he has an excellent sense of timing, knowing when to pause to let moments have the impact they need. He's probably the best narrator I've heard since Stephen Fry's reading of Harry Potter.

Enoch's autism keeps him from easily understanding others, so it's really a joy whenever Enoch is able to connect to or begin to understand the characters around him.

It's so rare to find new spins on either the sci-fi or fantasy genres that this book has been genuinely refreshing. Great settings, loveable characters, and a good story; what more could I possibly ask for?

This story was not what I expected. Given the anime style cover art I suppose I should have. The story woven here is much akin to what you could find on a blockbuster anime series, complete with unique hero powers and an eclectic mix of characters, each with their own contributions to the journy. My only problem with this yarn is the lack of explanation, the world is fleshed out, but why it is the way it is now is only briefly touched on, as are the many monster's and other inhuman characters. I can only hope that future books in the series will build a foundation for the very intriguing world the author has created. Highly recommended.

Dayton's visual way with words will keep your imagination engaged. The characters are inventively quirky and he is not afraid to explore uncomfortable relationships. Great one! Pick it up.

This book has potential of which it falls short

This book has the ability to be very good it's just that the writer did not know how to take advantage of his own story. He skips around in the story leaving out massive chunks of character and relationships building section. Which are crucial because it is hard to understand why they are doing what they are doing for each other. The characters action and motive are also all over the place. ex: you brake some people out of jail costing you your station in life. meaning you go from a King to a commoner fugitive. And so how the people you gave everything for, for no other reason other then it was the right thing to do. Attack you an say you have to prove yourself trust worthy to them. Now keep in mind these people have absolutely nothing you want or need like information or money and you have just given up a kingdom and betrayed the only real father figure you felt you have ever know. And still you have to prove yourself to them and not the other way around it just stupid. Oh and to top it the writer makes the main character feel ok about this situation and make him apologize when he could have just left them to rot. Like anyone in their right mind would have is just one of the many reason i gave this book 2 stars. It got two star because he had all the elements just did not know how to put them together.

This isn't a bad story but I feel it should be listed as a young adult novel. Maybe it supposed to be obvious but I always find it annoying to find out the book I've chosen has those slight changes that really simplify and make a story with a neat concept into 15 hours of "ooh my feelings, who am I?"

great book not cyberpunk at all

rather brilliant book set so far into the future that earth became primitive. loved the characters.

This was a great story

First don't be fooled by other recounts its a great story with a great premise that reminded me of "Thundar the Barbarian".

And I gotta say I desperately wish I could get my hands on more of this story. Be that a second book or anything, but from my searches this is a standalone and there is sadly no more. Just like Thundar gone just when it gets good.

Where does Etherwalker rank among all the audiobooks you’ve listened to so far?

I would rank it in my top 5 for sure! Maybe are number 4. It absolutely loved this book. Most likely because it reminded me of anime. And as you can see from the title I am a total Weeb.

What was one of the most memorable moments of Etherwalker?

Probably some of the deaths.

I love his voice! I got this book because I had just finished Trollhunters, which he also read, and I am glad I did.

There were a couple times when I laughed. But I am dead inside and can't cry anymore.

Would definitely recommend giving it a listen!

This book is very interesting with some original takes on some old ideas. I highly recommend that you give it a try.

I listened to the whole book in my car during rides and multiple times I found myself jumping out of my seat because of the narrator's incredibl performance.