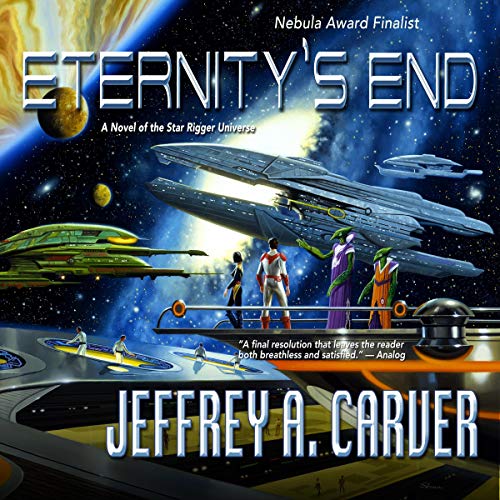 By: Jeffrey A. Carver
Narrated by: Stefan Rudnicki
Try for £0.00

Ghost ship Impris, lost during the War of a Thousand Suns, is the stuff of legend. Her very name conjures the perils of interstellar travel. But no mere legend, she is real - glimpsed on occasion in the hyperdimensional Flux and then gone. Her passengers and crew live on in a strange limbo, their fate hopelessly caught up in quantum defects in space-time, interstellar piracy, and galactic coverup.

To the pirates of Golen Space, she is a perfect lure, drawing passing ships to their doom. Many innocent star riggers have been captured in such raids and forced to pilot for the murderous pirates. One such rigger, Renwald Legroeder, makes a daring escape and flees to the presumed safety of the Centrist Worlds. But instead of finding asylum, he is framed for treason.

Something is terribly wrong in the Guild of Riggers and the government that should be protecting him. To clear his name - and perhaps to avert a disastrous war between worlds - he must escape a second time and partner with the amphibious Narseil to return to the Deep Flux and search for the lost Impris.

Legroeder's journey takes him back into the heart of raider territory, where he encounters a bewildering array of motives, conspiracies, and even deep-cyber romance. Forging friendships and finding love in the unlikeliest of places, Legroeder must nevertheless put his life on the line to protect the innocent and preserve a shaky interstellar peace.

A finalist for the Nebula Award, Eternity's End stands as a highlight of the Star Rigger saga and one of Jeffrey A. Carver's most memorable novels. Can be listened to as a stand-alone book or as part of the future history.

"True love, cognitive dissonance, divisions among the enemy, ambitious schemes, another mission - this one deeper than anyone has ever gone before into the substrata of the Flux - and a final resolution that leaves the reader both breathless and satisfied." (Analog)

"You don’t want to wait for the paperback." (Science Fiction Chronicle)

"A mesmerizing tale of human perseverance and courage under pressure that updates the legend of the Flying Dutchman." (Library Journal)

What listeners say about Eternity's End