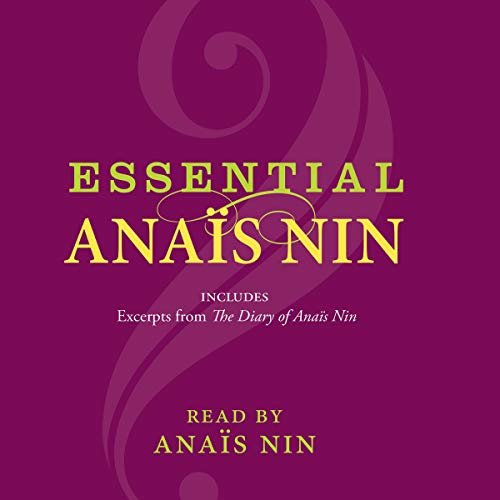 From her famous diaries, which she began in 1914 at the age of 11, Anais Nin reads passages that reflect the recurring themes of her work. In a slow, clear, heavily accented but hypnotic voice, Nin draws the listener into her spell-binding stories of a highly personal world as she paints a vivid picture of a woman as artist and self. This is an extraordinary, historic, archival, and memorable recording that will speak in a fresh voice to new generations.
©1966, 1967, 1969, 1971, 1974, 1976 Anais Nin (P)1972, 1993, 1998, 2007 HarperCollins Publishers

"One of the most remarkable diaries in the history of letters." ( Los Angeles Times)
"Anais Nin was and is perhaps the most interesting, the most perfectly emancipated woman of her world, a very impressive woman in every respect." ( Die Presse, Vienna)
"Sensitive and frank...a unique blend of the poetic and the precise. She charts the human chemistry of her relationships, noting changes, catalysts, fissions...Her diary is a dialogue between flesh and spirit." ( Newsweek)

this book is a collection of disconnected bits read by the author it sounds like it was recorded in a town hall she keeps knocking the mic you can hear people rustling and coughing it played for 43 minutes then stopped abruptly, the author clearly enjoys reading her work and laughs at it it comes over as pretentious and not the slightest bit enjoyable

As lovely as her words are, her delivery is just as interesting and engrossing. Alternating between a humerous almost-disaster and her own highly stylized feminist manifesto, this is a very satisfying, if short, primer for those unfamiliar with Nin's work and a treat for the already converted. The audio quality is as good as one would expect from source material nearly 40 years old. Highly recommended!

I was excited to see this recording listed, but it's difficult to understand with Anais Nin's heavy accent, which means I've not been able to get through it.

I had never read anything by Anais Nin; I believe I have read all I am going to.