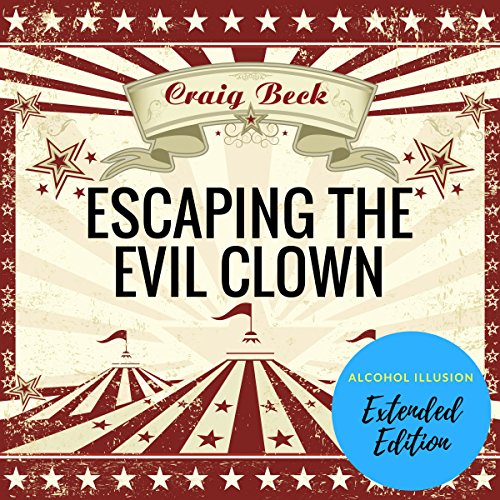 Craig Beck is known as the Stop Drinking Expert because he helps people to see the truth about alcohol. The shocking reality that is hidden behind the smoke and mirrors of the marketing and our own self-created social conditioning.

His book Alcohol Lied to Me has topped best seller lists for many years and has been translated into several different languages.

"Alcohol is the ultimate wolf in sheep's clothing, a deeply insidious and dangerous drug packaged into pretty bottles and marketed as a fun, social pleasantry by the drinks manufacturers. The western world is conditioned from birth to believe that good times and alcohol go hand in hand. In reality consuming this drug is like playing a very dangerous game of Buckaroo, the longer you keep playing the more chance you have the mule will kick and destroy your world." - Craig Beck

In this specially extended edition of his Alcohol Illusion series, Craig explains how you are not your addiction. You are not weak willed or broken. Alcoholism affects millions of people regardless of their gender, location, intelligence, or social standing.

Craig helps to explain this by describing your addiction to alcohol as though it is an Evil Clown that lives inside your head. Whispering encouragement in your ear as though he is your best friend. However, the smile is only painted on and this clown is actually your worst enemy.

Using the techniques in this book you can effectively and easily create separation between the real you and the addicted version of you. This is powerful because the moment you can see how the Evil Clown is pulling your strings is the same moment you slip out of his grasp.

All magic loses its power when you discover how the trick is done and the same is true of the alcohol trap. Knowledge is power and this book will help you to easily stop drinking without ineffective willpower, dangerous medication, or expensive rehab.

What listeners say about Escaping the Evil Clown

You can’t join two old books together and call it a new book Craig.

Was really needing new material and was expecting that... I had just finished Alcohol lies to me again and saw he had a new book here to so bought it... and it’s the same book .. even the anecdotes word for word.. exactly same book.. disappointed.. still in need of new material.

Wow. This book is amazing and the Evil Clown cones to life in this wonderfully narrated gem. I drank for 35 years and due to this book I am on the road to recovery and happiness. Thank you so much Craig Beck.

The fake webinar on the website is extremely disappointing in its deceptive nature (jigged to make you think it's live and you can join in a real conversation). However, I'm giving the book top marks anyway as it is extraordinarily well written and his theory is sound and unique. He also has a very pleasant talking voice. The website is made using cheap direct marketing techniques like a countdown timer with only ten minutes left to run. If you've trained in copywriting you'll see straight through it. You need to get past this to the good stuff as he is definitely onto something with his model of alcohol addiction and is very honest and raw in his narrative.

If you feel you or a loved one might have an issue with alcohol, give them or listen to this.
No reason to panic or feel like you're giving something up here, it's quite the opposite.
Craig nails all of the issues so positively and without any BS you'll wish you listened to this book sooner.
nothing to lose here so give it a go. I've totally stopped drinking as a result and the results are beautiful.

More convincing than competitive books about this.

I just finished listening to Alcohol Lied to Me and Escaping the Evil Clown audiobooks. They are the best books I've heard yet on dealing with alcohol. I gave up alcohol this spring for 3 months after listening to The Easy Way to Control Alcohol by Allen Carr because I wanted to lose 25 pounds before I went on a 7 week backpack hike (and I did lose the 25 pounds, alcohol weakens my appetite will power and I put on weight if I drink). I did my 7 week backpack this summer but did drink once every 8 days when we had a zero mileage day and resumed drinking after finishing the hike but in the 2 months since then I've gained 7 pounds and wanted to give up drinking again to keep the weight off and I'm on day 11 of abstinence now. Beck's audiobooks are much more convincing than Carr's book and this time I plan to make it permanent. I know I can go without alcohol as I do it for 7 weeks every summer on my annual backpack hikes. I do really appreciate the author explaining everything the way he does though. I did not realize about the 24 hour withdrawal urge (it explains it perfectly, 24 hours after giving up wine is when I want it again the most). Also I'm glad to know that after 2 weeks, one doesn't really have that withdrawal urge anymore. I'm also glad to have the mental image of how horrible alcohol is by itself. The author is right, I'd never drink it straight. And the realization that alcohol kills cells (that's why it's used to sterilize things) is a powerful image. I do want to 100% eliminate alcohol from my life the rest of my life though as I know it's the best way to live a healthy life and save money too. Not only will one save money on alcohol not bought but also on about 30% less food bought as one without alcohol does not eat as much. PS, I'm 68.

good book to get in the right mind set.

if you have alcohol lied to me, this book is the same!!! it is good though..

The why, the how and the tools to escape the evil clown that is alcohol! A great listen on Audible that made a huge difference in my daily life and brought me the peace I so desperately need.

spoke to me for sure! used it during times of temptation, and it helped set things straight in my mind again....highly recommend!

Craig has a great voice, not annoying at all, i get annoyed by some voices. Everything he says is complete truth and i feel blessed that I encountered his work. Best of luck to others trying to quit alcohol, give this a go, im positive its changed my life forever.

this is truly a great book. a must read if you're struggling with your drinking

finished it in five days. Really helpful, nice to listen. thank you for this Craig.

Learn the magic trick to lose it.

This book is stellar and well presented. Highly Recommend. Learn the magic tricks alcohol plays on the user
No longer be asleep to the illusion of the evil clown.

This book helped me understand that drinking is not the solution to life problems, what will happened if I continue drinking and how your own mind tricks you to continue drinking. Understanding these have kept me from drinking since I am learning to control the “tricks” my mind uses to inspire me to drink. I highly recommend this book and this author.

This book is a good read but there is alot of repeats from the 1st book Alchol lied to me.