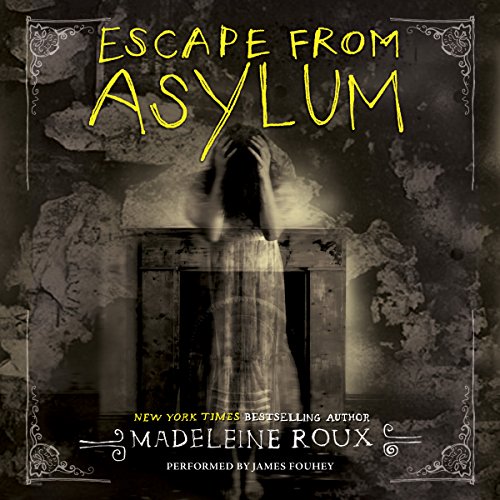 In this terrifying prequel novel to the New York Times best-selling Asylum series, a teen is wrongfully committed to the Brookline psychiatric hospital and must find a way out - before he becomes the next victim of the evil warden's experiments. With the pause-resisting suspense that led Publishers Weekly to call Asylum "a strong YA debut", Escape from Asylum is perfect for fans of Miss Peregrine's Home for Peculiar Children.

The nightmare is just beginning.

Ricky Desmond has been through this all before. If he could just get through to his mother, he could convince her that he doesn't belong at Brookline. From the man who thinks he can fly to the woman who killed her husband, the other patients are nothing like him; all he did was lose his temper just a little bit, just the once.

But when Ricky is selected by the sinister Warden Crawford for a very special program - a program that the warden claims will not cure him but perfect him - Ricky realizes that he may not be able to wait for his mom a second longer. With the help of a sympathetic nurse and a fellow patient, Ricky needs to escape now.

Set long before Dan, Abby, and Jordan ever walked the hallways of the Brookline asylum - back when it was still a functioning psych ward and not a dorm - Escape from Asylum is a mind-bending and scary installment in the Asylum series that can stand on its own for new listeners or provide missing puzzle pieces for series fans.

Exciting page turner but the end was beyond unsatisfying. Below is spoiler venting.

Why would he not care about the new subject? How did K escape? This horrible butcher of a warden and he feels no need to make sure the asylum gets closed down? Satisfied with just listening to records for the rest of his days? Now I don't feel bad at all that he was tortured.

A lovely book! Wow Really kept me on my toes!!!

Wow This book was well written. It really kept me on my toes!!! I would love to hear more about their great adventures.

great book! this book does a great job of painting a picture of everything they describe!

This series is my favorite of all time. I've listened and read all of this series a few times each.

This audiobook was similar to many other Asylum stories. Insane doctor experimenting with patients/victims. But...

I’ve had a fear of insane asylums. I almost ended up in one of these “hospitals” after a severe accident and hospitalized for months. The lost of control for that amount of time was making me “crazy”. I became very aggressive and paranoid. I fought against this lack of control and felt sure I was going to be institutionalize where I would completely lose control. I stopped the aggression and healed physically and demanded release.

So even if the audiobook was not completely original, it brought me back to those days. I enjoyed every minute of it; in that was it was scary. If anyone has had a fear of being institutionalize, this is the book for you. If you have ever been afraid of losing control, read this audiobook.

well, was it Keith or K

good book..... but I waited and waited for an explanation about k, was she a boy or girl? why did they call her Keith and him and he call her k and her? which is it?

I own this series in hardcover I love it!

This series is addicting and spooky! I found the first book and saw on audible there was more to the series and sure enough yes! I love the pictures provided in the book which is why I had to have them.

the book is amazing very well written. the narration was great really easy to understand and follow. overall fantastic and 100% recommend!

i enjoyed this book as well as the whole series. dark and thrilling story line

I really don't like how this story ended! It was kinda alot of the same all through the book. Then a let down at the end.